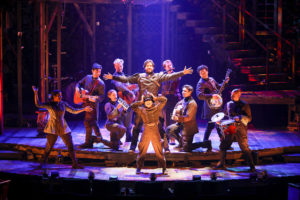 What’s new in San Diego theater this summer? Nearly everything.

There are world premieres everywhere: two at The Old Globe, three at the La Jolla Playhouse, one at the San Diego Rep and one at North Coast Rep. Plus, lots of San Diego premieres.

The Globe just opened “Ken Ludwig’s The Gods of Comedy,” in which modern-day classics professors and college coeds are confronted by screwball Greek deities from Mount Olympus. The Globe commissioned playwright JC Lee, and the result is “What You Are,” about a man struggling to come to grips with the sweeping social change around him.

At the Playhouse, the whole season comprises new work. First up is “Put Your House in Order,” part romantic comedy, part old-school thriller, from Chicago playwright Ike Holter. A first date turns into a united front against the end of the world.

Next is “The Luckiest,” which centers on a young woman stuck between her mother and her best friend, and trying to take control of her own life.

Coming to the Playhouse in August “Coast Starlight,” by Keith Bunin, a UCSD alum. It’s a tale of compassion and re-invention, where a young man with a terrible secret boards the L.A. to Seattle train, and bonds with his fellow passengers, who are all hoping to move forward in their lives.

At North Coast Rep, “Another Roll of the Dice” a new musical by Mark Saltzman, re-visits the denizens of “Guys and Dolls,” intertwining three other stories by Damon Runyon with the timeless and terrific songs of Frank Loesser.

Music also figures prominently in “33 1/3: House of Dreams,” a San Diego Rep premiere by locals Jonathan Rosenberg and Brad Ross, about the legendary Gold Star Recording Studio, that was home to some of the greatest early pop and rock groups. Look for rousing versions of the music of Sonny and Cher, The Beach Boys, Tina Turner, Richie Valens and many more.

San Diego has become a hotbed of new work. Music, comedy, drama, thriller. There’s something for everyone this summer. Be the first to see them all.