“ANOTHER ROLL OF THE DICE” at North Coast Repertory Theatre 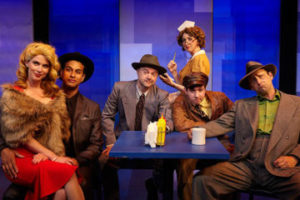 You can call them dames or dolls or molls, or even judys. And for every doll, there’s a guy (aka thugs, gamblers, grifters, skunks, lunks, punks, thieves and philanderers).

They’re all denizens of Runyanland, the colorful underworld of 1930s/’40s New York created by journalist/short story writer Damon Runyon (1880-1946). Dese guys was canonized in the show many call ‘the perfect musical’:  1950’s “Guys and Dolls,” with its unforgettable score by Frank Loesser and its hilarious book by Jo Swerling and Abe Burrows.

Lightning, as they say, rarely strikes twice, but playwright Mark Saltzman has given it the old college try, with the world premiere musical, “Another Roll of the Dice.”

The Runyon estate contacted him and offered carte blanche. He chose three stories and sought to tie them together, adding songs from the Loesser (in this case, lesser) catalogue… with the blessing of the Loesser estate.

The tone and tenor of the show captures the essence of Runyon’s gangsters and their quirky, stylized locutions, with tales of the sidelined or left-behind or lovesick who, in despair, “slink on over to the shady side.”

But Loesser’s pop songs (much different from his knockout, show-stopping musical numbers) aren’t a potent match. They’re mostly romantic numbers and ballads, added to some bona fide standards, like Hoagy Carmichael’s “Two Sleepy People” and “Heart and Soul.” The lyrics demonstrate little of the humor so intrinsic to Loesser’s songs from “Guys and Dolls” (such as “Adelaide’s Lament,” or “Marry the Man Today”). The “Dice” songs are generic, not character- or plot-driven, and that weakens their connection to the stories.

Under the skillful direction and choreography of Larry Sousa, the three tales are so well told, they’d function quite effectively on their own. But at North Coast Repertory Theatre, the cast happens to feature six terrific singers, and it’s a pleasure to see and hear them together, thanks to excellent arrangements by Jack Lipson.

Mindy’s featured prominently in “G&D” — there was that memorable cheesecake vs. strudel bet — and there are other sly references musical-lovers will pick up, such as a lost bet on horse named Paul Revere.

Zelma, the tough-as-nails, knows-all/sees-all/tells-all waitress who serves “high-class food to low-class customers” with names like Moose Moran, Sammy the Shirt and Touchy Feely (the safe-cracker), is our guide and narrator. She introduces each of the stories — “Tobias the Terrible,” “Breach of Promise” and “Baseball Hattie” – and their myriad characters, some 30 in all, played with brio and panache (and great wigs by Peter Herman) by this tight, multi-talented, fast-morphing ensemble.

Sarah Errington is endlessly hilarious as Zelma, as well as a burlesque dancer and a gold-digging society gal. Allison Spratt Pearce, a gifted chameleon, is delightful, and completely unrecognizable, in her various incarnations: a ditsy blonde moll, a slinky nightclub owner, a mousy girlfriend and a baseball-loving Coney Island wife. Most of these broads are not as dumb as they seem, and they can pull a fast one or two on these mostly macho men.

Both women sing wonderfully (Errington even scats throughout) and they rock Elisa Benzoni’s fun/dowdy/faux-glamorous getups.

Spratt Pearce and Jason Maddy (as a gangster boss-man and others) capture the Runyonesque New Yorkese best. Lance Carter is convincing as a sleazeball who tries to go straight (though he finds that Wall St. is just another racket). Mellow-voiced Darrick Penny is fun as a sticky-fingered burglar, and Elliot Lazar displays natural comic chops in several characterizations.

The offstage band (that makes a brief, comical onstage appearance) is strong, under the musical direction of Cris O’Bryon. But the over-reliance on ballads tends to slow the show’s pace.

Still, this new creation makes for an entertaining evening, even if it isn’t a wholly successful musical. I’ll lay odds that you’ll lean in, laugh, and be glad you took a chance on  “Another Roll of the Dice.”