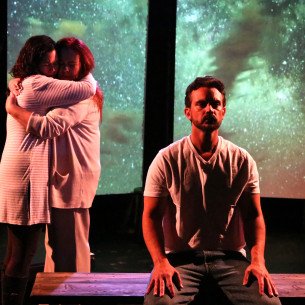 The statistics are appalling – but then, so is sending young boys off to brutal wars in foreign lands and expecting them to come back unscathed, and re-integrate into society on their own. One in five of the 2.7 million American veterans of the Iraq and Afghanistan wars have Post Traumatic Stress Disorder (PTSD). Most shocking: twenty-two veterans commit suicide every day.

In the world premiere, “Disappearing Act,” former San Diegan Delia Knight is telling one family’s story: her own. She created the piece three years ago (she also wrote a book on the subject, as yet unpublished), and it had a reading in San Diego. Perhaps, at that time, she wasn’t ready to offer her personal pain for public scrutiny. But now, under the careful and sensitive direction of Kym Pappas, InnerMission Productions is giving the work an intense, respectful and heart-rending airing.

The production is strong and earnest, though it takes a long time to get started (there’s more stage business than necessary – and the hair-raising suicide numbers, which are detailed in the program, need not be spelled out in the pre-show announcement). The “magic” theme (“It must be nice to disappear”), which gives the play its name, isn’t quite integrated into the story.

But a gut-wrenching story it is – about one man, his sister, his mother, his girlfriend and his two Marine buddies – and his two tours of duty in the Middle East.

It’s about how each of them deals with the aftermath: through alcohol, avoidance, denial, a search for truth, or suicide. The short, time-hopping scenes make for jagged telling, as if spliced from scattered memories – each character getting time to interact with or react to Alex during his deployment and subsequent to his two returns. This powerful, passionate story, credibly told, is undoubtedly played out in millions of American households. Knight’s family will be in the audience during the show’s brief, two-week run.

The emotions of the well-cast ensemble run high (real tears are shed by several players) and run the gamut. Steve Froelich is terrific as Alex. We get to see his playful side, his attempts at romanticism, and his teasing and peacemaking relationship with his comrades, interspersed with his outbursts of anger, and the hollow, dead-eyed, alcoholic catatonia he exhibits on his release. The ending is surprising, but a tad too subtle.

Kaly McKenna, Jamie Channel Guzman and Rebecca Doyle Dorado are quite believable as the concerned mother, sister and main squeeze, respectively. As the Marines who, along with Alex, experience the horrors of war and beyond, Salvador Velasco and Robert Malave have an excellent rapport with each other and with Froelich.

The set is very basic (the photos on one of the panels include pictures of Knight and her family); the projections are not always facilitative. Yet this harrowing slice of modern family life is well told, well presented and vitally important. Surely, this is a far cry from treacly holiday fare. But at a time when violence, revenge and gun-wielding are on so many minds, collateral damage must be considered. (Half the proceeds from the $10 vet-honoring ‘stars’ go to the charity organization, Active Heroes).

This provocative and informative play is both cautionary and necessary.