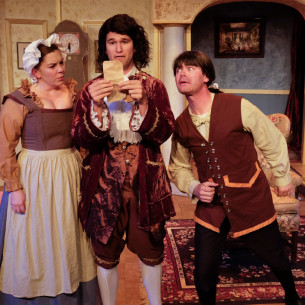 He translates, adapts and has his way

With farces that are très français.

His translaptations appear in verse.

With a knockout production of “The Liar.”

Yet this later work, “The Heir Apparent,”

For all its clever word accretions

It dwells too long on body secretions.

And since its plot flies willy-nilly,

It goes without saying that it’ll be silly.

There’s madness and mayhem – and drag, to boot!

This is, alas, a lesser play,

Though again well directed by Robert May.

May’s last outing with an Ives translaptation, two years ago, was based on Pierre Corneille’s 17th century comedy, “Le Menteur” (The Liar). “The Heir Apparent” is adapted from a little-known 18th century farce, “Le Légataire Universel,” by Jean-François Regnard, who seems to have borrowed liberally from the much more magnificent Molière; this play is more than a little reminiscent of “The Imaginary Invalid” and “The Miser.”

Set in 1708, in the Paris home of Geronte (Eric Poppick), the story focuses on a sick old man who locks his gold in chains and has more ailments than body systems. His abdominal despair encourages him to regale all and sundry about his lavatory sojourns and their expulsive results. I thought I might get away without any fart humor, but then the second act proved how very wrong I was.

Geronte thinks he’s dying, and his nephew Eraste (Ben Williams) wants his money, so he can marry his beloved, the beautiful young Isabelle (Mariel Shaw), whose mother, the battleaxe Madame Argante (Devlin) is advising Geronte on his will. Of course, there are a couple of wily servants in attendance:  ever-clever Crispin (Joshua Jones) and voluptuous Lisette (Kristin Woodburn). And there’s one more character in the mix: the diminutive, vertically-challenged attorney, Scruple (Amy Dell).

Geronte announces, to everyone’s horror (except the Madame, who stands to benefit most) that he’s decided to marry Isabelle himself. The three shocked schemers work overtime devising ways to fool the lawyer and forge a will, making Eraste the heir  — and giving a bit to Crispin and Lisette, so they can marry, too. This is where the costumes, wigs and cross-dressing come in. You probably can predict how it all turns out.

The cast is excellent, every one of them seems to be having a blast in creating an archetypal character and catapulting it over the top. But it’s all in good fun (I can’t say ‘good clean fun’; this one’s not for the medically squeamish).

The production is fast-paced and aptly manic when it should be. The set (Bob Shuttleworth) and costumes (Lisa Burgess) are delightful.

If you’re up for a puerile, ludicrous (but skillfully written) escape as we leap into the holiday season, have at it.

“THE HEIR APPARENT” runs through December 13 at Scripps Ranch Theatre, on the campus of Alliant University