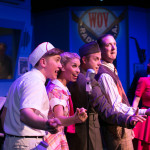 On a snowy December night in New York, 1942, The Mutual Manhattan Variety Cavalcade is about to go on the air. One singer hasn’t turned up, but the show must go on.

That’s the flimsy premise of “The 1940s Radio Hour,” written by Walt Jones, former head of the UCSD Theatre Department, who directed the Broadway production in 1979. But there’s just not much there there.

No plot, and a stereotypical cast of characters: the frazzled station manager, the drunk, skirt-chasing lead singer; the sexpot, the ingénue, and the wide-eyed delivery boy who just wants a chance to perform.

There’s plenty of nostalgia on hand – if you know the references, like the real, retro commercials for Nash cars and the quick-fix laxative Sal-Hepatica.

There’s a sentimental, patriotic side, too. The show is dedicated to the troops overseas, and one of the cast members is shipping out the next day.

Basically, this musical revue is an excuse to sing some great old songs, with highlights like “Boogie Woogie Bugle Boy,” “My Mama Done Told Me” and “I’ll Be Seeing You,” punctuated by holiday favorites like “Jingle Bells” and “Have Yourself a Merry Little Christmas.”

The piece was written for terrific singers and a 13-piece band. New Village Arts, falls short in both domains. Music director Tony Houck, who portrays bandleader Zoot Doubleman, is a double-man, indeed. His piano is the only instrument on the small NVA stage… except when he picks up a trumpet, which he plays with one hand while tickling the ivories with the other.

Saddled with corny lines and hackneyed interactions, the rest of the cast is game, though a couple of the lead guys were flat on their solos. The gals are knockouts, though. The tight harmonies, swing dancing, sound effects and period costumes work quite well, and director Dana Case has inserted some clever stage business.

If you’re a 1940s aficionado, you’ll enjoy this walk down memory lane. If not, the hot chocolate laced with peppermint schnapps will surely warm your heart.

“The 1950s Radio Hour” runs through December 31 at New Village Arts in Carlsbad.