“DIANA THE MUSICAL” at the La Jolla Playhouse 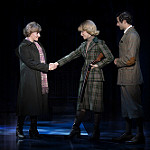 What if your Prince turns out to be not so charming?

The whole world watched the fairy tale wedding on TV in 1981 – the 20 year-old bride and the 25-foot train on her sumptuous gown. But Lady Diana Spencer’s storybook marriage had no happy ending – and not much of a rapturous royal beginning.

There was Trouble in Paradise from the get-go, as the story is told in David Bryan’s music and Joe DiPietro’s book and lyrics for the world premiere musical, “Diana,” at the La Jolla Playhouse.

Thirty-three year-old Prince Charles was not only supercilious and condescending, but he was deeply in love with the married Camilla Parker Bowles, and continued the affair throughout his marriage.

The love triangle sits squarely at the center of the new musical – with a couple of additional counties weighing in: the Queen, of course, and Diana’s favorite romance novelist, Barbara Cartland, whose role isn’t particularly necessary, though it does provide comic relief, and a reminder of the difference between fantasy and reality. Judy Kaye is pitch-perfect as Her Majesty and the pink-feathered, fluffy writer.

The intention here, according to Tony Award-winning director Christopher Ashley, was not to have any villains of the piece. Though the performances by Roe Hartrampf and Erin Davie are excellent, Charles and Camilla hardly come off as endearing.

It’s Diana’s evolution from wide-eyed innocent to suicidal depressive, to fully-formed, assertive, stylish and philanthropic rule-breaker and game-changer that fascinates, and Jeanna de Waal brings her to delightful life, with just the right look and voice, though she isn’t much of a dancer.

This is Diana’s story, and it’s imaginatively if a tad manically told, with a peppy, mostly pop score and strong backup by an energetic nine-piece orchestra and a hard-working ensemble that morphs from obsequious courtiers to adoring populace to ravenous paparazzi.

There’s humor in the staging; the aggressive, jerky choreography; and the songs, one of which, “The Dress,” can’t be repeated over the airwaves, but it certainly is memorable.

The show oozes charm, talent, goodwill, stunning costumes and slick production values. It’s bound to make a splash on both sides of the pond.