“TO FALL IN LOVE” at Melpomene Productions 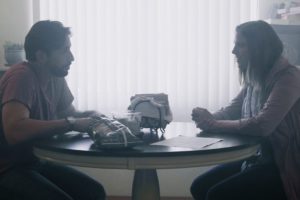 If you’ve ever thought, “I wish I were a fly on the wall,” here’s your chance.

Over the next two weeks (eight opportunities only), “To Fall in Love” is being performed in a private house in Pacific Beach, with a bridge-chair-seated audience of 12 in the living room, nearly nose-to-nose with the two actors.

What you’ll be watching – often feeling more like a voyeur than a theater observer — is a married couple who has split up, trying to spend one (last?) evening together, to determine whether they’ll reunite or divorce.

Wyatt has invited Merryn to his house, to take a kind of ‘love survey’ that’s designed to make two people fall in love, in the hope that it will bring them closer again.

The questions come from a famous 1997 study by psychologists Arthur Aron and his wife, Elaine, at the State University of New York at Stony Brook. The 36 questions guide two people in a conversation that becomes increasingly intimate, beginning with fairly neutral queries like, “Would you like to be famous?” to “When did you last cry in front of another person” and “Whose death would you find most disturbing?” The questions worked so well in the research study that two subjects, recruited to test-drive the questions, actually fell in love and got married, inviting the whole lab to their wedding.

As these two fictional characters reveal their thoughts, fears and dreams, we watch them recount their first meeting and the reasons they fell in love. Over the course of 70 minutes, they’ll come together (even having sex, briefly – obscured by a kitchen counter), and come apart, in a push-me/pull-you of indecision wrapped up in the tragedy that befell their young son.

The interactions are occasionally amusing, but generally so personal, intimate and intense that you might actually feel uncomfortable at times.

The playwright, Jennifer Lane, a teaching artist with Playwrights Project and UCSD, has constructed dialogue that sounds palpably real, with all the hesitations, false starts and awkward pauses of actual daily conversation, intermingled with the heartache of loss and grief.

The players, accomplished local actors Eric Casalini and Beth Gallagher, under the banner of Melpomene Productions (“a new California Professional Media Company” named for the Greek Muse of Tragedy), have been working on the piece for two years. And yes, they actually did get together as a couple for part of that time.

They are outstanding – separately and together – wholly natural and credible at every moment.

When they performed the play at the 2017 San Diego International Fringe Festival (then titled, “To Fall in Love with Anyone, Do This”), they garnered Outstanding Drama and Outstanding Writing awards, and went on to win the Tennessee Williams One-Act Play Competition at the New Orleans Literary Festival the same year. The film adaptation of the piece, directed by Michael Foster, premiered at the San Diego Museum of Photographic Arts in September 2018.

The group is hoping to bring the stage version to the 2019 Edinburgh Fringe Festival (the world’s oldest and largest such festival). Proceeds from this production, in addition to an online GoFundMe campaign, will help to generate the resources to take the play overseas.

Meanwhile, you get to experience this unique, site-specific performance, and watch it evolve over time. Be prepared for perhaps the most demanding part, the final challenge: staring into the eyes of the other person for four solid minutes. Not easy. You get to decide how it works for Merryn and Wyatt. And if it might work for you – with a stranger, or with anyone you know and/or love.