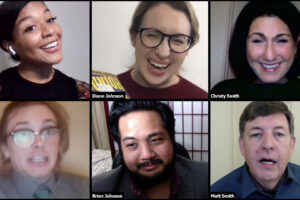 For most people, “Keeping up with the Joneses” is just an expression. For the couples sharing a suburban cul-de-sac, it’s a painful daily reality.

John Cariani, Tony-nominated actor (for playing Motel the Tailor in the 2004 Broadway revival of “Fiddler on the Roof”), is also a playwright, best known for his first theater work, “Almost, Maine.”

“cul-de-sac” (he apparently insists on the lower-case title) was his second play. In 2006, he starred in the Off Broadway production by the Transport Group. He has revised the piece since; this one, completed in 2017, changes some characters’ names to make them more common.

The piece is billed as a dark comedy. Its targets are easy ones: the elusive American Dream and the (endless, pointless) pursuit of Happiness.

Everyone seems to be watching what everyone else is doing.

The Joneses (Ashley Graham, Hunter Brown) are really the ones to watch. They seem positively blissful, with their adorable 3-year-old twins, new house addition, extensive landscaping re-design and two hot, fast, identical cars (custom paint-jobs inspired by the color each Jones saw when they first met).

So, the “color you first saw” becomes an obsession for all, part of the effort to “keep up.”

They can’t, of course. Keep up, that is (or, in many cases, recall that first color).

Brian Johnson (Bayani Decastro Jr.) just lost his chance at promotion and will probably be forever stuck as a middle manager); Matt Smith (Steven Jensen) has been in bed, depressed, for a year since a family tragedy. But here, in spectacular minimization of mental illness, he’s just said to be “sad.”

In the text, Cariani labels the Joneses the Winners, the Johnsons the Losers and the Smiths the Has-Beens.

Of course, things aren’t as ginger-peachy as they seem chez Jones, where they dance in front of the window every Friday night, to show everyone just how happy and carefree they are. Needless to say, their fantasy sandcastle will be washed away by the end.

At 95 minutes,, the play feels slow and repetitive; it may well be the author’s intention to re-run whole conversations verbatim, but it does get tedious.

What we’re left with is materialism, greed, envy, discontent, disenchantment and desperation. Not to mention extreme self-involvement in the midst of stagnating marriages. Sounds pretty comical, no?

The play may not be very satisfying, but the Coronado Playhouse Zoom production, deftly directed by Sean Paul Boyd, is very well executed.

The cast is uniformly effective, and they make the over-the-top characters and situations commendably credible.

“cul-de-sac” kicks off Coronado Playhouse’s 75th anniversary. Bravo to them for continuing to make theater, even in the most trying of times.