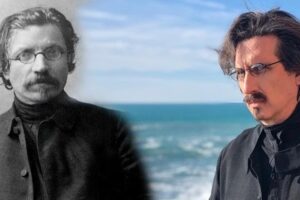 Hershey Felder, acclaimed pianist-actor-writer-producer and inhabitor of major composers, was born to Eastern European immigrants and grew up in a Jewish enclave of Montreal. Yiddish was spoken in his modern orthodox home (he also speaks six other languages); from a young age, he participated in Yiddish theater.

So, it makes perfect sense for him to delve into the life of the pre-eminent Yiddish writer, Sholem Aleichem (1859-1916, born Solomon Naumovich Rabinovich).

In his latest world premiere, his sixth from his pandemic home in Florence, Felder has moved his film production team to Nervi, on the Italian Riviera, where the great, proliific writer went to rest and convalesce from tuberculosis, from 1908-1912.

It’s a very worthy undertaking; Sholem Aleichem (his pen-name means “Peace be with you”) had something of a rollercoaster life, rising and falling from poverty to wealth on multiple occasions.

His mother died when he was 12 years old, his stepmother was a master of colorful Yiddish curses, his fiercely devoted wife (nicknamed Hodel, whose name was later given to one of the daughters in “Fiddler on the Roof”) was always by his side.

And now, Felder tells us repeatedly in the guise of Sholem Aleichem, at 50 years old, he’s “facing down the angel of death,” though in fact, he was to go on to live another seven years.

These things, plus the ten stipulations of his will (no titles, no monuments, among other demands), are about all we learn of Sholem Aleichem, who was often called “the Jewish Mark Twain” (Twain, it’s said, once suggested to his humorist/social commentator counterpart, that he was “the American Sholem Aleichem”).

But the crux of this new play (written by Felder) is the story of Stempenyu, the itinerant klezmer fiddler. That would seem to be the primary link to, or mention of, “Fiddler on the Roof,” since the Sholem Aleichem stories the musical tapped into were about Tevye the Dairyman and his daughters, and made no mention of fiddlers or roofs.

“Stempenyu, A Jewish Novel,” written in 1888, has long been out of print. It was the first work of Sholem Aleichem translated into English, and the only one under his personal supervision.

The book features Sholem Aleichem’s signature sardonic humor and historic documentation of shtetl life in Russia (he himself was born in Ukraine). Recent scholars have suggested that the novel inspired Marc Chagall’s famous 1912 painting, “The Fiddler,” which in turn inspired the title of the 1964 international megahit musical.

With no piano link to Sholem Aleichem, Felder called on the Klezmerata Fiorentina, a superb klezmer ensemble of four soloists from the Maggio Musicale Orchestra of Florence.

To paraphrase the group’s violinist, Igor Polesitsky, they conceive of this music of Ashkenazi Jews as spoken language, and use instrumental techniques based in the inflection of the Yiddish idiom, to carry on an emotional, musical, improvisational conversation in front of an audience.

And play they do, throughout this 90-minute piece. With expressive eyes and few lines of dialogue, Polesitsky takes on the role of the fictional Stempenyu, a 19th century Yiddish rockstar based on an actual Yiddish musician who had young girls (often married ones) swooning for him in every town where the traveling band played.

Felder’s representation of the novel features two weddings and other traditional events, but focuses on the fascination, obsession and fate of one ardent admirer, the beautiful Rokhele (Federica Montagni). Felder, bewigged, plays both her stern, unpleasant mother-in-law and Stempenyu’s jealous, conniving wife.

While Stempenyu’s story gives ample opportunity for the Klezmorata to evoke the joy, pain, laugher, weeping and anguish of the highly emotional music, it doesn’t tell us much about Sholem Aleichem “Before Fiddler.”

Felder keeps busy, serving as narrator, as Sholem Aleichem, and the two older women. He even sits in with the band, on piano, at the end of the play.

But we feel a bit short-changed, in terms of Sholem’s fascinating background, family, youth and motivations.

Going forward, the balance of the piece needs to shift – or perhaps the play’s title.

The consummate musicianship is wonderful, but maybe a tad too dominant. Some of the text, and the story itself, seem redundant.

Felder, as always, is an engaging performer and excellent company. He even looks a lot like Sholem Aleichem.

The settings are attractive and evocative (the wall plaque in Nervi, commemorating Sholem Aleichem’s time in the area, is especially affecting).

The filming, mixed with live elements, is well done (Felder co-directed with Stefano DeCarli), with a good deal of reliance on overlapping images and cross-cutting. Felder even cast his wife, former Canadian Prime Minister Kim Campbell; his long time sound designer, Erik Carstensen; and his associate director, Trevor Hay, in the piece.

The new play-with-music has many enjoyable elements, but it needs sharpening; thematically, it’s not yet cohesively integrated.