“CHESS” at the Barn Stage Company in Temecula 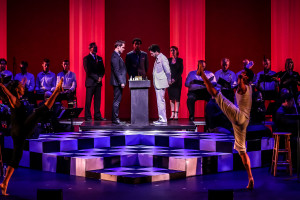 I’d heard about the Barn Stage Company, and I knew its artistic director, J. Scott Lapp. For a year or more, I’d been invited to come up and check out what they were doing. Finally, last weekend, the time was right. I went to see the concert version of “Chess.” And I was blown away.

This was a production of epic proportion. The 26-piece Temecula Valley Orchestra (under the assured and astute direction of John Mario Di Costanzo). A choir of 18 (not, as I thought, a pre-established, fully-formed group, but one auditioned and put together by the prodigious Lapp just for this production, directed by Rachel Pfeifer Green). An ensemble of eight. Two agile modern dancers. And six principals, all highly experienced and professional (four members of Actors Equity), a number of whom have performed on San Diego stages.

The singing was superb. The musical backup (vocal and instrumental) was outstanding. The characterizations were potent and credible.

There was only one thing wrong: this amazing, gargantuan effort lasted only four performances. So, no opportunity for reviews, or word of mouth (for audience expansion and development). How would anyone outside the immediate area know about this gorgeous hidden gem?

The fact is that the beautiful 300 seat Temecula Community Theatre is shared by multiple groups (the other theaters are of the ‘community,’ non-professional or youth variety). There’s also a busy schedule of wide-ranging performances (jazz, pop, big band, modern dance, ballet, rock tributes, symphonic and choral music, and more), in addition to performances  at the Merc, a smaller venue just across the way, where The Barn Stage Company presents Cabaret at the Merc the last Sunday of every month.

It all happens in the midst of the historic and charming Old Town of Temecula. A short drive away is the scenic, Tuscany-like Temecula wine country. The trip to Old Town only took about 50 minutes from my home. It was a surprising and thrilling experience.

“Chess,” with music by ABBA’s Benny Andersson and Björn Ulvaeus (with lyrics by Tim Rice) tells a fascinating East vs. West story, loosely based on the Cold War-era World Championship chess competitions between American Bobby Fischer and a composite of several  Russian grandmasters.

There is political and romantic intrigue, a defection, and manipulations and machinations galore. One of the strongest and most chilling songs is “(Nobody’s on) Nobody’s Side.” There are emotional  ballads like “I Know Him So Well,” “Pity the Child” and “Heaven Help My Heart.”

But the musical, originally released as a concept album, is really quite static, despite its multiple locales (Merano, Italy to Bangkok, Thailand). I saw the original production in London (which ran for three years) and a small-scale staging in San Diego.  The American version ran for only two months on Broadway (this was the London version). The show is rarely produced, but actually works better in concert – and exceptionally well in this particular production.

The three central characters were expertly portrayed, by mega-voiced Rena Strober as Florence, who works for one chess master and falls in love with the other; smirky Louis Pardo as the snotty, arrogant Fischer stand-in, Freddie Trumper; and San Diego-born Michael McCorry Rose, with his chiseled good looks and strong, supple tenor as the Russian, Anatoly.

The technical aspects were also superb: a minimal set but attractive establishing projections (Matthew Herman); stunning lighting (Curtis Mueller) and attractive costumes (Erica Palay). The sound balance could have been better; it wasn’t always easy to discern the lyrics in group numbers.

I hesitate to write too much, since you no longer have the opportunity to see this mind-boggling production. But, according to Lapp, this is the kind of high-caliber show you can expect from The Barn Stage Company every time. (They also mount fully-staged, smaller-scale musical productions in a black box theater within the Truax building nearby).

Next up for Barn Stage, in concert at the Old Town Temecula Community Theater, are “Songs for a New World” (“a musical about life’s choices,” featuring the marvelous music of Jason Robert Brown, January 12-15) and the Lerner and Loewe classic, “Camelot” (March 2-5).

Mark your calendar now. These productions don’t last long, but they’re so worth the drive. If you’re an avid theatergoer, this is a company you must add to your list.

Find out more about The Barn Stage Company at thebarnstagecompany.com