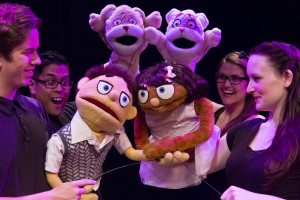 Be forewarned. There’s full puppet nudity. And loud puppet sex. F-bombs galore, and a rash of other raunchy words. And hilarious, target-hitting songs like “Everyone’s a Little Bit Racist” and “The Internet is for Porn.” Not to mention poignant interactions and searing commentary on growing up, entering the Adult World, and acknowledging the reality that you may not be quite as “Special” as you’ve been told, and doors will not just swing open for you because you’re ready. “It Sucks to Be Me” is a song everyone has sung at one time or another (but now it has a melody!).

That’s the great thing about the puppet (and live actor) musical, Avenue Q. It speaks to us all, floundering 20-somethings as much as jaded oldsters. But it isn’t geared for anyone under 18.

The spunky, irreverent little comical show knocked the Tony Awards on its ear in 2004, winning the Big Ones: Best Musical, Best Original Score (Robert Lopez and Jeff Marx) and Best Book of a Musical (Jeff Whitty).

It remains extremely clever and endearingly irresistible. But it’s a complicated show to produce, what with its costume-changing, Muppet-like puppets (Avenue Q has been called “the X-rated Sesame Street) and requirements for puppet-manipulating actor/singers (its original stars were former Muppeteers). Which may be why, though the national tour kicked off in San Diego in 2007, thanks to The Old Globe, to my knowledge, no local company has yet produced the musical.

Enter Coronado Playhouse, a community theater (or, as they put it, “theater for the community”) which has taken other surprising theatrical risks; they were the first local company to present “The Wild Party,” a sophisticated and rather racy musical, in an excellent production.

Now, Coronado is taking us to Avenue Q. And a delightful place it is. Not only does the set mirror the Broadway original, but the voices sound remarkably like the knockout New York cast.

Director/choreographer Jennie Gray Connard totally nails the tone of the piece, a tricky mix of charming and cynical, hopeful and hopeless. After all, most of these denizens of the outlier street are losers. “I started at Avenue A,” reports the newcomer, Princeton, after plaintively singing “What Do You Do with a B.A. in English?” He worked his way down the alphabetic avenues till he could afford something. (A day later, he gets laid off, downsized before he even begins his first job). He spends the rest of the show seeking his ever-elusive “Purpose.”

Love blooms — and disappoints. Plans are made — and thwarted. But despite a dose of self-pitying depression, and occasional “Schadenfreude” at the misfortunes of others, things work out pretty well for these neighborhood friends.

And they work out very well indeed on the small Coronado stage (where the audience, who may eat dinner or brunch before a performance) is seated at tables, cabaret-style).

Heading a strong and convincing cast is Catie Marron as Kate Monster, the lovelorn (furry) lass who’s an assistant kindergarten teacher dreaming of opening her own Monster school. Marron’s voice is the strongest on the stage, and her facial expressions perfectly match her puppet character’s moves and actions. Edgar Diaz-Gutierrez is endearing as hapless Princeton (who sort of falls for Kate Monster, but gets seduced by Lucy the Slut, amusingly played by funny Ferril Gardner). Tiffany Loui is a hoot as Christmas Eve, the language-mangling Japanese woman engaged to Brian (Jarrod Weintraub), a zhlubby Caucasian wannabe comedian slacker. Her psychologist’s romance-advice song, “The More You Ruv Someone, the more you want to kill them,” is hilarious.

Uptight Rod (talented high schooler Kyle Best) is the closeted gay guy, and Nicky (Joel Miller) is his devoted friend, who tells Rod he wouldn’t mind “If You Were Gay.” Trekkie Monster (resonant-voiced Kit Fugrad) is the porn-meister with the Cookie Monster growl. The Bad-Idea Bears (Daryl Daley and Patrick Mayuyu) are comical embodiments of our worst, stupidest natures, but their ultra-high-pitched voices obscure some of their funnier lines.

And we can’t forget the building’s Superintendent, the what’s-he-doing-in-this-show Gary Coleman, former child star pillaged by his parents. He’s always portrayed by a female, and Taylor Henderson is just right in the role.

The puppets are terrific, created for this production by longtime puppeteer Joe Fitzpatrick, theater manager of Balboa Park’s Puppet Theatre. Now that they’re here, maybe other companies can rent them for future Avenue Q productions. Those aspiring troupes should also rent the ‘Sesame’-spoofing video that accompanies the script and score; it may cost a little more, but it’s well worth the investment.

The semi-hidden stage-right band is fine (three musicians, multiple instruments), but the sound mix somehow separates them from the miked singers, so it feels, at times, like the audience has to work to integrate the sound sources and harmonies. Some voices are less potent than others; the weaknesses are heightened by the uneven audio mix.

A minor quibble about a wonderfully funny, engaging, accomplished production.