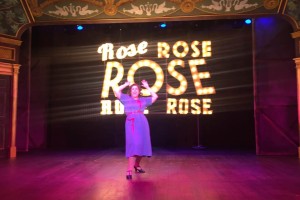 Opening nights are a double-edged sword. Critics are invited, and their early reviews help to spread the word about new productions. But the flip side of that free advertising (“ink is ink,” whether positive or negative) is the fact that shows are rarely 100% ready at the opening. Even after an intense rehearsal period, every show – and its cast – needs some time to settle into the rhythm, the pace, the characters, the flow and the interactions.

With so much theater on local stages, critics seldom have the opportunity to visit or re-visit a production late in its run. But in the case of Cygnet Theatre’s “Gypsy,” I made it my business to see the show again, once I learned that the understudy, Melissa Fernandes, was stepping into the lead role on a regular basis – every Sunday matinee, and some additional performances as well (on a last-minute basis). As a regular performer, I felt that she was entitled to a full-on review.

Just coming off a stupendous turn as the leading lady in “Sunday in the Park with George,” she seemed more than ready to tackle Mama Rose, an Everest of Broadway roles, the stage mother from hell.

Clearly, in the weeks since the show opened, the singing, moves and character delineation had become sharper and more precise. Everyone seemed more comfortable in their roles. But Fernandes brings a different energy to the proceedings. She has tender moments, loving moments, and very funny moments (and a very humorous delivery of the song “Mr. Goldstone”). She exhibits a wide range of emotions and a broad character arc, from beginning to end.

Her presentation of the grand finale, her total breakdown in “Rose’s Turn” (the most famous of “11 o’clock numbers”) is phenomenal. We watch her go from brash to broken, as she finally realizes that all the pushing and prodding of her two hapless daughters (June –in a delightfully more focused and poignant performance by Katie Whalley Banville; and Louise – the always-marvelous Allison Spratt Pearce) was never for them, but only and always for herself.

The ultimate reconciliation between Rose and Louise, who has become the wildly successful stripper, Gypsy Rose Lee – is truly heart-rending, even a bit tear-jerking.

I’m convinced that Fernandes can do almost anything. I’ve seen her play aggressive, petulant, sexy, coy and kittenish. Her intuitions and acting acumen are acute. She makes it all believable. In this production, playing opposite her husband, Manny Fernandes (as Rose’s devoted, sometime doormat, beau/manager, Herbie), only heightens their interactions, because their connection is so real and palpable.

Of course, there’s her voice – which has power and range, exceptional dynamic control and emotional flexibility.  Musical, comedy or drama – I can’t wait to see what she does next.