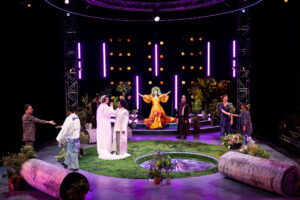 Gender-bending has always been a cornerstone of Shakespeare’s “As You Like It.”

A woman dresses as a man and woos the man she loves, while another woman falls for the man she isn’t.

And remember, during Shakespeare’s time, young men played all the female roles, including the man who played the woman who ‘becomes’ a man.

So, La Jolla Playhouse artistic director Christopher Ashley and his co-director, transgender director-choreographer Will Davis, in association with San Diego’s esteemed LGBTQIA+ Diversionary Theatre, decided to take the whole gender-fluid idea to the edge. Their entire cast is Queer, nonbinary and/or transgender.

In the (prescient?) 1599 pastoral comedy, the royal court was always buttoned-down, stodgy and rigid (here, it’s all staid black and white). And the Forest of Arden, where all the real (and romantic) action occurs, was always a magical place.

In this production, the magic entails light, bright colors and lush greenery. It’s a place where folks can be who they want and love who they want. In these frightening, polarized, socio-politically retroactive times, that sounds positively fanciful.

And the production certainly is.

It’s beautifully designed (Emmie Finckel), a circle in the square playing-space, perfect for a wrestling match (excellently choreographed by Chelsea Pace, also responsible for intimacy staging). In the second act, imagination takes over. The greenery increases regularly, and the circle becomes a neon-rimmed pond, which several characters walk into, clothes, shoes and all.

First, a summary of the (somewhat convoluted, heavily populated) plot.

(I loved reading in Ashley’s Directors’ Note that the multi-talented 14-member cast “self-identified the roles they were most interested in playing”).

There are warring siblings and banishments. The mean, nasty Duke Frederick (resonant-voiced Rachel Crowl, who also plays the shepherd Corin) has usurped the throne of their brother, the good-natured and generous Duke Senior (David Greenspan), who has established a comfortable life with loyal courtiers, in the Forest of Arden.

Duke Frederick’s daughter, Celia (charming Jen Richards) is closely attached to their cousin, Rosalind (marvelous chameleon Peter Smith). On a whim, Frederick banishes Rosalind, calling them a traitor and threatening death if they don’t leave the court. Celia insists on going, too.

For safety’s sake (they have no familiarity with the Forest, and the roads are dangerous), they disguise themselves and head off, accompanied by Touchstone, the clown and motley fool (nimble, funny Cody Sloane).

Rosalind becomes the youth, Ganymede, and Celia dresses as his rustic sister, Aliena.

Orlando escapes to the Forest, where they post, on the foliage, their (less-than-stellar) love poems to Rosalind.

Love flourishes in the Forest.

The couriers meet the shepherds and goatherds; Touchstone falls for Audrey (Taiwo Sokan, who’s also great as Charles, the Wrestler). Silvius (Jess Barbagallo) adores Phoebe (Alanna Darby), who scorns and spurns them, but is enamored of the irresistible Ganymede.

Transformed into hunky Ganymede, Rosalind sees Orlando’s poems, and offers to act like and ‘become’ Rosalind, to show Orlando just how to win the much-desired love object. The relationship gets tricky.

One of the court cohort of the deposed Duke Senior is the melancholic Jacques, who disdains love and society. Although they’re an engaging performer, Rami Margron is the most active, energetic and least morose Jacques I’ve seen. They even act out (sometimes on hands and knees), the famous “Seven Ages of Man” speech.

As in all Shakespeare’s comedies, all’s well and ends well (the Playhouse cleverly refers to this one as “the original rom-com”), in family harmony and multiple marriages.

The piece is exuberantly directed, with many lovely, amusing and touching moments. Some actors play a bit broadly, and some can’t sing as well as others, but there’s a marvelous bit of a capella harmony to Queen’s “Find Me Somebody to Love” (musical director/arranger, T. Carlis Roberts).

The pre-recorded music is often comically apt, ranging from Cheryl Lynn’s “Got to Be Real” to The Weather Girls’ “It’s Raining Men.”

The sound design overall (Ien Denio) is excellent, with the taped numbers supplemented by live musicians, two of whom are in the cast, slipping between stage and bandstand. The lighting (Cha See) is appropriately dim in the court, bright in the Forest. And the costumes (Mel Ng) are a wide range of current, country and outrageous (the orange ballgown for the god of marriage, Hymen, played by Esteban Andres Cruz).

Most impressive of all is how superbly everyone handles the language. It’s conversational and crystal-clear (voice and text coach, Ursula Meyer), making it easy to follow, even for Shakespeare newbies.

Thanks to the complex plot and the doubling of roles, it’s hard at times to keep score and distinguish the various characters and relationships.

Still, there’s a lively, joyful feel to the whole production, underscored by the sense of flexibility and freedom embodied in the concept and cast. It’s buoyant and fun.

Love, as we all know, is a many-gendered thing.