“THE OCTOBER NIGHT OF JOHNNY ZERO” from Backyard Renaissance Theatre 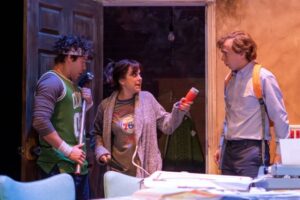 It’s a dark and stormy night.

So stormy that the rolling, crackling thunder at the Tenth Avenue Arts Center will go straight to your marrow.

“The October Night of Johnny Zero” is a world premiere play by Backyard Renaissance Theatre’s artistic director, Francis Gercke (an accomplished actor and director as well).

It’s impressively written, with sharp, believable dialogue — and extreme intensity. Ace director Richard Baird ratchets up the suspense to the max in this two-act, two-hour production.

Because the story and situation angle through a zigzag path, with neck-snapping turns (though some threads aren’t quite tied up at the end), it’s hard to describe without ruining the chilling surprises.

The time is October 1981. In a rundown house in the Delaware Valley, we meet three characters (plus a spooky, nameless fourth, a spectral vision who gets a curtain call, but not a program credit).

The three are very damaged, mentally unhealthy people. They’re all traumatized. Terrible things have been said and done in the past. Regret, guilt and grief run through all three – and they all have secrets they’re desperately harboring.

Jessica John, as Barbara Pinnolini, Philly native, is simply splendid — and she gets most of the snappy, snarky, sarcastic lines, delivered to perfection (“You’re so broke you can’t even pay attention” is a good one).

This barb is aimed at her reticent son, Franky (Geoffrey Ulysses Geissinger, credibly geeky),who’s smart but rather odd. He’s brought home a schoolmate whose Mom never showed to pick him up at school. This is something Franky has never done before. These two barely know each other.

Johnny (tightly-wrapped Marcel Ferrin) is a high school basketball superstar. Franky idolizes him (photos and articles paper his bedroom walls). Franky offers to help the agitated Johnny with his Trig and English homework, so he can submit it and be allowed to play in tomorrow’s State Finals. Franky will even complete the work for him, though there’s some three-way debate about whether that’s dishonest or cheating or, in the case of a book report, plagiarizing.

Through it all, Barbara drinks and drinks, and gets nastier as she does. She relentlessly controls and undermines Franky, even charging him for allowing Johnny to use their broken phone.

Johnny, who has his own parental relationship issues, is edgy and quick to anger. He’s a tad freaked out by the wacko situation and family dynamic he’s gotten into. He’s trapped. And the rain keeps pouring down.

A huge kitchen knife and a sledgehammer make an appearance, along with that ghostly, ghastly apparition, which only Johnny seems to see.

It’s all truly nerve-racking. And that (offstage) basement really does seem scary. We can understand why Franky is terrified of going down there. But that’s where the freezer is, where Barbara stores the milk so it lasts longer.

Except for corn flakes, there’s no food in the house. But there are gallon jugs of wine that Barbara rapidly dispatches. She’s annoyed that Franky brought up rosé instead of chablis (“We drink pink when we’re in the pink,” she admonishes). She slugs it anyway, right from the bottle.

Gradually, everybody’s dirty secrets are revealed. And when they are, we come to like these characters even less. The piece reminded me of the macabre, darkly comic works of Sam Shepard, with a sliver of hope at the end. But it’s superbly done.

The varying and unstable accents call attention to themselves, and don’t help the interactions; communication is faulty and oblique enough without them, though John uses hers to good effect.

The set (Yi-Chien Lee) is wonderfully detailed, all chipped paint and peeling wallpaper, scattered debris, haphazardly shelved cans and jars, and a cockeyed, empty picture frame on the wall (you jump a little when it spontaneously falls down unassisted at one point).

The flickering lights (Kate Rose Reynolds) are aptly spooky. And the sound (Kevin Anthenill) is chilling.

“Johnny Zero” would be perfectly timed to Halloween, a great companion piece to the deliciously creepy “Witchland,” another world premiere that BYR presented last year.

The company (Gercke and John are founders) does like the spine-tinglers. With a little tweaking, this will be a great one to add to their collection.