“ALL THE WAY” at South Coast Repertory 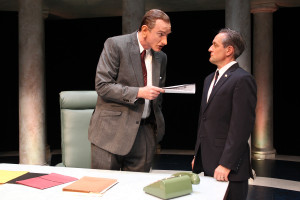 Politics is a matter of convincing and compromise. And no one was a better schmoozer, seducer, arm-twister and back-breaker than our 36th President (1963-68), Lyndon Baines Johnson.

It can be fascinating to watch how the sausage of lawmaking gets made, as we saw in the 2012 Steven Spielberg film, “Lincoln,” with the 13th Amendment to the Constitution, abolishing slavery.

In a similar vein of riveting historical fiction comes the stage play, “All the Way,” by Pulitzer Prize-winner Robert Schenkkan, who captured another troubled and troubling historical period in his wonderful work, “The Kentucky Cycle.”

The focus is one year in Johnson’s long political life; he spent 24 years in Congress, as both a Representative and a Senator, before becoming, as he repeatedly refers to it, “an accidental President,” after the assassination of John F. Kennedy.

Here, we see him from 1963-1964, ramming through the Civil Rights Act in an effort to prove himself in the countdown to his (landslide) election of 1964.

It was a very fraught time. The country was still grieving over the loss of JFK, whose brother, Robert, was still attorney general and continued to be a thorn in Johnson’s side.

Johnson, a Texan, was dealing with the restive Southern states, which were fighting to maintain their segregationist status quo, and the various (and sometimes internally contentious) African American organizations, from SNCC (Student Nonviolent Coordinating Committee) to the NAACP (National Association for the Advancement of Colored People) to the SCLC (Southern Christian Leadership Conference) and its president, Dr. Martin Luther King, Jr. – all fighting for their place at the table, for civil rights and voting rights. And in the background, the Vietnam War was ramping up.

Schenkkan’s lengthy but spellbinding drama shows Johnson, metaphorical warts, large nose and ears and all (wonderful prosthetics by Academy Award-winning makeup artist, Kevin Haney), at his best and worst – a giddy or petulant child, a sometimes cruel boss and husband, an intimidator and even a tyrant. Nobody in the play comes out looking squeaky clean. Everyone has a price, and is willing to be coerced into forfeiting one desire to get something else.

It’s striking how similar the actors are in appearance to their unforgettable historical forebears. Towering Hugo Armstrong persistently uses his height (as Johnson did) to bully and overwhelm his adversaries: J. Edgar Hoover (Robert Curtis Brown); Sen. Strom Thurmond (Hal Landon Jr.); Gov. George Wallace (Jeff Marlow); and Martin Luther King (Larry Bates, who played the same role, to excellent effect, in “The Mountaintop” at the San Diego Rep in 2013).

Some on the distaff side are also represented: Lady Bird Johnson and Katharine Graham (Nike Doukas); Muriel Humphrey and Lurleen Wallace (Lynn Gallagher). And, used as a pawn to cajole the “liberal” faction of the Democratic Party, with a Vice Presidential position dangled as enticement, was Sen. Hubert Humphrey (JD Cullum), who ultimately did deliver the liberal vote and became Vice President in 1964.

Those of us who appreciate American history, or lived through those times, know very well the outcome of all these confrontations and crusades. But watching the particulars unfold is as suspenseful as a murder mystery (the assassinations – of RFK and MLK — were yet to come, though the three Civil Rights workers gunned down in Mississippi feature prominently).

With actors standing in the aisles right near us at times, with ‘Johnson’ coming downstage to talk directly to us (even flirtatiously winking at a woman in the audience), we feel, to borrow a line from the blockbuster musical, “Hamilton,” like we’re “in the room where it happened.” Or, the many rooms.

If this show doesn’t wake you up and leave you having long conversations about how far we’ve come – and haven’t – you weren’t paying attention. This is one mammoth undertaking that’s unequivocally worth the drive to Orange County.