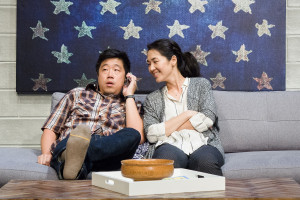 This didactic comedy was written by La Jolla native Mike Lew, who’s returning to his old stomping grounds for the West coast premiere of his latest play, which has had one other production.

The piece focuses on a pair of disappointed, disaffected second-generation Chinese American siblings: Albert (Raymond J. Lee) and Jennifer Chen (Jackie Chung). They did everything their overbearing, over-protective, tough-love ‘Tiger’ parents expected of them. They performed superlatively in school, became concert musicians.

Now, she’s a doctor, whose slacker white boyfriend just walked out on her. And he’s a hyper-productive software programmer whose user/slacker co-worker (who considers Albert a “robot”) just got a promotion and is now his boss. (Both slackers, plus another role, are humorously played by Nate Miller).

The Chens are in the midst of an existential crisis. They blame their parents, who taught them how to over-achieve, but not how to get along in the world. They have “low self-esteem and no life skills.” They can’t live up to the “racial expectations” of America. They feel like aliens, outsiders in their own country. Society sees them as the “model minority”: super-smart and over-achieving, exotic and passive, docile and deferential. But definitely “the Other.” It’s all given Albert an ulcer, and Jennie is a frenetic control-freak.

So, the two decide to leave their jobs and embark on a road trip __ An “Asian Freedom Tour” – to embrace their Americanism. They reject the American Dream: Albert just wants to be “an American Idiot” and Jennie just wants to live “a romcom life.”

First stop on the tour: Irvine, CA, where their parents (a successful doctor and engineer, deftly portrayed, among other roles, by Mary Ann Hu and David Shih) can be blamed for all their woes. The parents listen, mildly commiserate, and end with the predictable bromide: “Suck it up.” Psychotherapy doesn’t work for Jennie, who thinks she’s smarter than the therapist (only a Ph.D., not an M.D. Ph.D like her). Albert whines, “They want to turn me into a trope.”

Lost and adrift, ungrounded and misunderstood from every direction, feeling like total failures (though they were programmed for success), they decide to go “Full Eastern” and return to the ancestral motherland, China, where they assume that “race is no longer a factor.”

Of course, they don’t fit in there either – maybe even less. They’re considered inauthentic and subjected to new and different stereotypes. They begin to feel that they’re between two worlds/countries/cultures, not fully belonging to either.

And the government is controlling their lives, which have gone totally kerflooey, as the play becomes more and more surreal and fantastical (not always in a positive way). The Chens barely escape, returning to the U.S. just in time to end the play with soppy, sentimental platitudes about family and home and appreciation of parents. Sigh. After all that high-speed hijinks, and some very big laughs, the piece ends with a thud.

Though director Jaime Castañeda (La Jolla Playhouse associate artistic director) keeps the pace very rapid (sometimes the quippy dialogue goes by too fast), there are still slow spots. The piece needs a serious trim and another edit or three. A fleet 90 minutes would get the message across with more finesse. The extreme exaggeration and excessive thematic repetition diminish the work.

The design is expert, however, with a slick, sleek set (Lauren Helpern), as well as lighting (Anthony Jannuzzi) and sound (Mikhail Fiksel) that are as sharp and forceful as some of the comic lines. But what’s with the DJ on the upper level? At the outset, between every two scenes, Shammy Dee spins and samples. We get that these are Millennials. We don’t need the overkill.

We come away feeling preached at – and banged over the head. Especially in this fraught political moment, it would be nice to get a comical message of cultural pigeonholing and unfair expectations without the moralizing and intellectual battering.