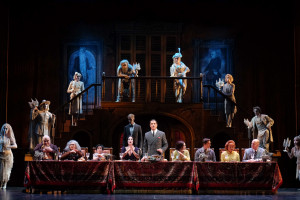 Finger-snapping did not accompany the cartoons of Charles Addams (1912-1988), that appeared for years in The New Yorker. But the short-lived TV show that bears his “Addams Family” name (1964-1966) inspired an animated version, several remakes, a video game and a movie franchise, not to mention the 2010 musical that has settled briefly in Vista, at Moonlight Amphitheatre (only 3 more performances).

All the relatives are there: Gomez and Morticia, and their macabre, S&M offspring, Wednesday and Pugsley. Then there’s the aptly named Lurch, the ambisexual Uncle Fester, Grandma and assorted (ghostly) ancestors.

The story (by Marshall Brickman and Rick Elice, of “Jersey Boys” fame) is kind of lame. Wednesday falls in love with a “normal” guy, Lucas, and before they officially announce their engagement, they insist on that well-worn trope, getting the disparate/antithetical families together.

Disastrous results include a secret (which nearly destroys the 25-year sexy/happy Gomez-Morticia marriage), an attempted poisoning (of sorts), a couple of breakups, and a trip to the moon (say, what? But it does give Fester the opportunity to give this ba-da-boom answer to Lucas’ mother, when she asks where he’s going with a jet-pack strapped on his back, “To da moon, Alice!”).

There are puns galore, and references to other cultural favorites, like “Spamalot” (a few bars from the satirical “Always look on the bright side of life”). Some of composer Andrew Lippa’s lyrics are very clever. For example, when Gomez feels cornered, he describes the sensation like this: “Like a corpse in the ground, or like theater in the round, I’m ‘Trapped.’”

The elaborate Moonlight Stage production is a San Diego premiere (the first national tour came through a few years back), and it makes the most of the flimsy, if quirky, material.

The cast is strong, with Broadway veterans David Engel and Terra C. MacLeod playing the bizarre but loving parents, Gomez and Morticia. His Spanish accent could be more consistent, and her slinky, vampiric moves could be more fluid. But they do have great chemistry together.

The rest of the family sparkles (though they’d probably hate that bright, upbeat term applied to their dark brutality). Randall Hickman is a total hoot as Fester, and Lindsay Joan has phenomenal pipes as Wednesday. Samantha Wynn Greenstone, Ryan Singer and Dustin Ceithamer are funny – each in his/her own bizarre way – as Grandma, Pugsley and Lurch.

Lucas’ conservative kin, the Beineke Family from Ohio (“a swing state!,” one of many topical, political add-ons), features endearing Nick Eiter  as Lucas, Corky Loupé as his tightly-wound father, and Eileen Bowman, amusing as his rhyming, unhinged mother.

The spectral Ancestors are given some nifty moves by choreographer Karl Warden.

The lush, multi-layered red velvet curtains should get their own billing. The show itself may feel familiar and derivative, and its themes of love and family may not have sufficient grotesquerie to match Addams’ brilliantly warped mind, but that shouldn’t in any way spoil the fun.