“A CHORUS LINE” at the Coronado Playhouse 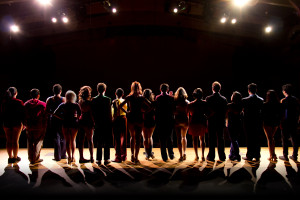 They may be old favorites – but they don’t come along that often. Both give an unflinching ration of reality, mixed in with the feel-good songs. “The Fantasticks” shows the light and dark side of young love; and “A Chorus Line” reveals the tough life of ‘gypsy’ dancers on Broadway.

Written by Harvey Schmidt (music) and Tom Jones (book and lyrics), “The Fantasticks” is the longest-running musical in New York history, opening Off Broadway in 1960 and continuing for 42 years (more than 17,000 performances). After a hiatus, the show re-opened in 2006 and is still going strong. Over time, it’s played in 67 different countries.

Loosely based on “The Romancers” (“Les Romanesques”) by Edmond Rostand (of “Cyrano” fame), it features elements of ‘Romeo and Juliet’ and ‘Pyramus and Thisbe’ – without the tragic ending.

There’s a sweet, simple, poetic beauty to the allegorical piece, which concerns two neighboring fathers who trick their children into falling in love, by pretending to feud and building a wall between their adjoining gardens.

The intimate play fits perfectly into a small theater, and the Scripps Ranch Theatre production, under the sharp direction of Ted Leib, highlights the simplicity, the magic and the lyricism.

It helps to have adorable, lithe and lovely-voiced Olivia Hodson as Luisa, the ingenuous girl who fancies herself a princess and longs “to be kissed upon the eyes.”

The scheming fathers (Ralph Johnson and Eric Poppick) and the actors they hire to enact an abduction and duel (Dagmar Krause Fields and Devin Collins, whose wide-eyed wackiness is most amusing) could be funnier.

As El Gallo, our guide, narrator and the action’s manipulator, Rudy Martinez has just the right world-weary, wistful tone – and a mellow, appealing voice. He gets to sing the show’s most famous song, “Try to Remember,” but the lyrical, imagistic lyrics are notable throughout.

Perhaps there are a few too many set-pieces to climb (cubes, a platform, a bench), but the theatrical wizardry and minimalism are generally maintained in the design, and the choreography is effective.

The musical accompaniment is a highlight of this production: the marvelous Terry O’Donnell on piano, joined by Melissa Morgan on harp, a terrific heartstring-plucking addition.

Meanwhile, the Coronado Playhouse is closing out its 70th season   (yes, you read that right) with a very satisfying production of “A Chorus Line.”

Known for Michael Bennett’s iconic direction and choreography, the aching musical was composed by Marvin Hamlisch, with lyrics by Edward Kleban and book by James Kirkwood and Nicholas Dante, based on intensive interviews with real Broadway hoofers.

The show spotlights 17 dancers going through the grueling process of auditioning for eight spots on a chorus line in a Broadway show. The director pushes them to tell personal stories about themselves – which they do, in a dazzling array of songs – and we learn repeatedly about an early passion for dance which, despite a difficult childhood, proved to be a life-saving escape. Some on the line are young and optimistic; many are veterans looking for one last job before it’s too late for them to dance any more.

The original Broadway production opened in 1975, and ran for 15 years, winning 9 Tony Awards (including Best Musical), as well as the Pulitzer Prize for Drama.

In Coronado, savvy director Thomas Fitzpatrick shows us dancers warming up (one of my favorite things to watch) before the lights officially come up on the bare stage that, with the addition of mirrors and, at the end, the signature gold lamé costumes and top hats, will serve as the setting for the one-day audition.

There’s a potent 10-piece orchestra backstage, though their sound was too muted. Kudos to the Playhouse for bringing in such formidable live accompaniment.

The dance skills are variable in this ensemble, but the vocals are strong (and there are 12 additional pit singers). But quibbles aside, the cast is so committed, so energetic, so very present, that the production works like crazy. Our hearts even break a little when the group has to be whittled down to the final eight.

Standout performances are Alyssa Guttendorf’s sassy and sarcastic Sheila, the oldest and most jaded of the bunch (Guttendorf is making her San Diego theater debut in this show; hopefully, we’ll be seeing more of her talent and range); Amanda Arbues as Diana Morales who, with her warm, strong voice, gets two of the greatest songs: the theater-class-trashing “Nothing” and the anthemic “What I Did For Love.”

Shirley Johnston acts, sings, dances and co-choreographs with notable skill; she plays the most evolving dramatic role: Cassie used to be in a relationship with the director, Zach (played by her real-life husband, Rob Johnston). Rob convincingly exhibits the gruff, seemingly heartless exterior of a leader who squeezes the best from his performers, but is a lot less successful in managing his personal life.

Many of the other cast members get moments to shine, and when they all come out for the finale, “One,” (despite the ill-fitted pants on most of the men), it’s thrilling. We’ve been through this hellish day with them, and we all deserve a deep breath and a celebrational song.

Both these shows are touching and effective, and would make for an outstanding holiday gift or family outing.