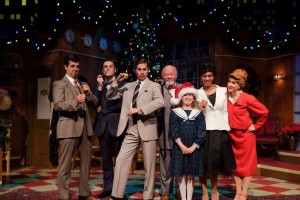 If you’re a fan of nostalgic, holly-jolly radio plays, San Diego is the place and Christmas is the time.

For five years, Cygnet Theatre delighted audiences with a radio play version of “It’s a Wonderful Life.” This year, New Village Arts is reprising its “1940s Radio Hour” (with some nifty new additions).

The latest entry into the old-time radio cavalcade is San Diego Musical Theatre’s new adaptation of the beloved 1947 movie, “Miracle on 34th Street.”

A cast this strong makes you wonder why they just didn’t present a full-on play with music.

But there are two real reasons to attend a live radio broadcast: seeing a small ensemble morph into multiple characters, with minimal use of props or costumes; and watching all the sound effects being cleverly made by a Foley artist equipped with diverse noise-making gizmos: bells and whistles, a tiny door to slam, shoes to stomp, all aimed at convincingly re-creating the ambient sounds of everyday life.

In some cases (as in “The 1940s Radio Hour”), we are also treated to the off-mic shenanigans and relationships of the radio performers (the inebriated leading man, the bookmaking custodian, etc.).

Little of that here, unfortunately. But there are some appealing original songs (by music director Jon Lorenz) and period-appropriate commercials that, surprisingly and amusingly, feature San Diego businesses. There’s a nod to Tupperware (an in-joke, since SDMT founder/producers Erin and Gary Lewis are bigwigs in that biz) and a charming shoutout to the San Diego Commission for Arts and Culture that helps promote so many local companies and productions.

Aside from those elements, the storytelling is pretty straightforward, hewing close to the film.

An older, white-bearded man wanders into Macy’s department store in New York’s Herald Square just after their tried-and-true Santa had shown up to work “tight” and was summarily fired.

This new guy (Jim Chovick, outstanding) certainly looks the part, and claims he’s the real deal, named Kris Kringle. Nice things begin to happen to several people. Kringle even manages to bring the heads of the highly competitive Macy’s and Gimbels together (that would be Mr. Macy and Mr. Gimbel, in a hilarious star double-turn by Eric Hellmers, playing both men by adding/subtracting a moustache-on-a-stick).

But the skeptics remain skeptical, including the single mother, the Macy’s PR person who hired Kringle (Janaya Mahealani Jones) but doesn’t believe in magic or Santa; and the dubious house psychologist (Hellmers again, with an aptly Freudian accent), who insists the man’s a fraud and should be sent to a psychiatric institution.

It’s all a question of faith – in Santa Claus and miracles and second chances (the defending attorney in Kringle’s court case – in a leading-man portrayal by Matthew Malecki) also happens to be in love with the willfully independent divorcee and her adorably precocious daughter, Gracie (talented local 6th grade theater veteran Julia van Skike). In a variety of other roles, recent San Diego transplant Lise Hafso makes a comical mark).

Santa Claus is put on trial, and the future of Macy’s, a blossoming love relationship, a child’s holiday joy and the judge’s happy home-life hang in the balance.

Of course, the ending is tied up in a festive holiday bow, and Santa deftly avoids incarceration (with the help of young Gracie). Whew. Close call.

Something else to celebrate: the wonderful singing of this gifted ensemble, which is enhanced by Lorenz’s marvelous arrangements, augmented by the multi-talents of Cris O’Bryon, who serves as Narrator/Announcer, Foley artist and pianist extraordinaire (though the backing on the upright muffles the instrument’s sound).

Special note should also be made of Michael McKeon’s beautifully detailed set, excellently dressed by David Medina and attractively lit by Christina J. Martin. The sound (Kevin Anthenill) is crisp and the costumes (Beth Connelly) are pleasing, with an especially lovely black-and-white outfit for Ms. Jones.

So, tune into the season, and partake in the bounty of local musical radio theater.