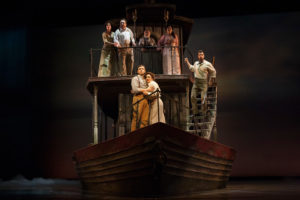 There’s magic in the river, in the shape-shifter and in the music. And through it all, weaves the magic of Love.

There’s the fresh young couple, Rosalba (María Fernanda Castillo) and Arcadio (Daniel Montegro), who meet on the boat El Dorado (which means ‘place of fabulous wealth or opportunity’) sailing along the steamy river (called Rio Amazonas; hence, the singular article, el, not the plural las, in case you were wondering, as I was) enroute to Manaus, Brazil, in the heart of the Amazon rainforest, site of a landmark opera house, the Amazon Theatre (Teatro Amazonas).

Rosalba is a journalist, hoping to meet and interview her idol, the legendary diva Florencia Grimaldi, about whom she’s been writing a book for the past two years. Arcadio is a reluctant assistant to his uncle, the ship’s level-headed Capitán (Hector Vázquez). Arcadio dreams of taking flight, as a pilot. On the trip, he falls hard for Rosalba, but she resists, insisting that love is just a trap, a prison.

Already ‘imprisoned,’ for quite some time, is the older married couple Paula (Adriana Zabala) and her long-time husband Alvaro (Levi Hernandez). All they do on board is bicker and fight, repeatedly accusing each other of apathy and dispassion. But when he gets swept overboard, she realizes what love really is.

Then there’s Florencia (Elaine Alvarez), traveling incognito, searching for the love of her life, Cristóbal Ribeiro da Silva, whom she left 20 years ago to pursue fame in her singing career. She has regretted it ever since. He went off into the jungle to search for the world’s rarest and most elusive butterfly, and hasn’t been heard from since.

Amid the lush, lyrical score, on the trip along a river that’s filled with spirits and fanciful creatures, each character is taking a personal, emotional journey. The libretto, written by Marcela Fuentes-Berain, was suggested by her mentor, teacher and friend, Garbriel García Márquez, whose magical realism inspired her story.

The San Diego Opera is using the wonderful set (Mark Frederic Smith) and costumes (Linda Pisano) of the 2016 Indiana University production. The bi-level paddle-wheeler moves this way and that on a turntable. The game Opera Chorus, under chorus master Bruce Stasyna, 30-strong and in commendable voice, admirably doubles as the jungle and river spirits, whimsically costumed, writhing alongside the boat and bewitching its passengers (impressive director Candace Evans also choreographed, an accomplishment, given a minimum of natural dancers).

As day turns to night, and a fierce tropical storm descends, the lighting (Todd Hensley) changes beautifully to match every mood.

But it’s the music, Catán’s marvelous tapestry of sound, that most convincingly conveys the magic and mystery of the river: its languor and mythical denizens, its lazy placidity, teeming with life underneath, and its thrilling and angry climatic variation. Harps, marimbas and steel drums meld with horns and strings to evoke every nuance of the power of nature.

The action is facilitated by Riolobo (Luis Alejandro Orozco), literally, river-wolf, a sorcerer whose conjuring provides the passengers with enchanting opportunities for serenity, insight and romance.

Under the baton of Joseph Mechavich, the San Diego Symphony transports us to this other world, dexterously lulling us with the murmur of the water and the beauty of the sun-and moon-rise, then unsettling the surface calm with the ferocity of the storm and the menace of the cholera epidemic on land.

The singing is potent throughout, and the acting is strong as well. But though the men are forceful, the women’s voices consistently overpower them.

Alvarez’s soprano is rich, full and supple, with stratospheric top-notes. She soars throughout, but especially at the end, when she makes a most magical transformation.

Castillo’s soprano is bright and lovely; while her character tries to be brittle, her voice and her melodies ooze romanticism. Mezzo-soprano Zabala brings a kind of world-weary maturity to her musical moments of sorrowful regret and joyful reunion.

This short opera is another treat from SDO under the aegis of David Bennett, who is masterfully intertwining the great, grand opera classics with lesser-known or smaller chamber pieces that strive to offer something for any musical taste.