“THE CAKE” at the La Jolla Playhouse 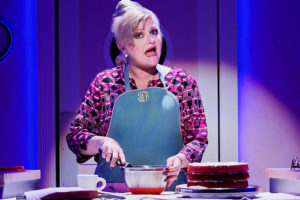 Talk about being ripped from the headlines!

“The Cake” concerns a conservative Christian baker who is asked to make a wedding cake – for a gay couple.

The real story – actually, stories – are in the news right now. This week, in Kern County, CA, a judge ruled in favor of a Bakersfield baker (female) who refused to make a custom wedding cake for two women. The technicality used to avert a charge of discrimination was that the couple was told they could buy a pre-made cake.

A separate case is now being decided in the Supreme Court. A male baker in Colorado refused to create a wedding cake for two men. The Trump Administration has weighed in on the side of the baker. The Supremes’ decision is expected in June.

Playwright Bekah Brunstetter couldn’t ask for a better backdrop to her 2017 dramedy. She was actually inspired by the news stories that have been swirling around the issue for years; she began her research and writing in 2015. But in her play, the stakes are even higher. The protagonists are not strangers.

The North Carolina baker, Della (Tony Award-winner Faith Prince), has known one of the young brides all her life. Jen (Aubrey Dollar) is the daughter of Della’s late best friend.

So, the dilemma comes down to faith vs. heart, tradition and family vs. honesty and love.

Brunstetter doesn’t quite stack the deck – though there are two characters on opposite sides of the issue who are pretty formulaic and doctrinaire.

Della’s husband, Tim (Wayne Duvall), a plumber, just believes what he believes and has no intention of questioning, changing, or entertaining another viewpoint. To him, that kind of lifestyle is just wrong.

Macy (Miriam A. Hyman), Jen’s African American fiancée, who comes from a liberal intellectual family, is aggressive, condescending and judgmental in her approach to Della. She tries to discuss ‘epistemology’ with the baker.

Della, a renowned practitioner of her craft, has just become a contestant on her beloved reality TV program, ‘The Great American Baking Show.’ But Macy proceeds to undermine every aspect of the woman’s personal/professional  passion: cakes, butter, gluten, people dying from sugar, etc.). She’s a conservative’s stereotype of a smartass, tree-hugging, strident lesbian.

And, no matter what the era (the program says ‘Now’), the play is set in North Carolina (where the playwright grew up – in a conservative Baptist community), no one will convince me that the fact that Jen is gay is the crux of every conversation, but the fact that her girlfriend is black is never mentioned – by anyone except Macy herself, who is very aware of who she is and how she does – or doesn’t – fit in: “I’m black and I’m agnostic AND I’m a woman and I’m tall AND I’m queer. I’m in a world that is not designed for me.”

Early in the play, Macy says “Ambivalence is just as evil as violence.” And that’s where the center of the play resides.

Jen is terribly torn; she desperately wants to please her mother (who’s been dead for five years), which is why she’s come ‘home’ in the first place. She and Macy live in Brooklyn, but she wants a “perfect,” traditional wedding (she’s a persnickety, perfectionistic planner), right down to holding the event in the same location her parents were wed.

But the Bible teachings and the rejection of the ‘other’ are deeply bred in her, and she keeps having second thoughts about everything – although she admits to Della that she’s never loved anyone like she loves Macy.

For her part, Della is struck by the intensity of their love. She has no children of her own, and she’s sexually frustrated in her marriage. The presence of Jen and Macy makes her wonder a bit – about her own strong, long-held Christian beliefs.

In the midst of her crisis of conscience, Della admits that everything is changing  too fast for her. Her alter-ego, the disembodied Brit-accented voice of the host of the Baking show (Jeffrey Ingman), chides and criticizes her baking and her opinions. But whether or not that ‘character’ is necessary is moot.

In the end, there’s some compromise on all sides, but no one really cedes serious ground. Perhaps that’s the playwright’s assertion of gritty realism, but the play feels stilted and slanted, and ultimately not wholly satisfying.

Brunstetter (also a writer/producer for the hit TV series, “This is Us”) is smart and clever, and can be funny, though the (oh so male) fart humor really has no place here. The point about Della’s strict rule-following is hammered home relentlessly. We get the connection between her recipes and her religious life. Trust the audience.

The La Jolla Playhouse production is beautiful. The set (David F. Weiner) is a delightfully detailed bakery, with some of the scrumptious-looking cakes in the display case lit from within, and above it all, a high shelf lined with decorative plates. As so frequently happens in theaters large and small these days, the primary set glides downstage and upstage to accommodate other scenes (two contrasting bedrooms, briefly situated in front of a drawn curtain). The lighting (Elizabeth Harper) and sound (Paul James Prendergast) provide potent support.

Under Casey Stangl’s direction, Prince starts out at a shrill, frenetic pitch, but when her Della starts to think about and question what she’s saying, and has some genuine interactions with her husband, Prince settles into a believably conflicted character. Duvall is credible as her husband, though it’s not a very dimensional role.

Dollar and Hyman are lovely together; their connection is palpable, though Macy’s full-frontal assault on Della at the outset makes her seem too unfeeling and invulnerable. Dollar’s displays of uncertainty are heart-rending; we can feel her wavering between her true love and her strong sense of roots and filial obligation.

Macy and Della do take small, hesitant steps toward spanning the great chasm between them – even if the only available bridge is cake.