“THE IMPORTANCE OF BEING EARNEST” at The Old Globe 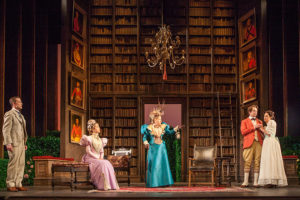 The brilliant, famously flamboyant Oscar Wilde left us with an epigram for any occasion.

When he wrote his masterwork, “The Importance of Being Earnest,” in 1895, he was taking potshots at his Victorian society: the vapidity of the wealthy, their posturing and condescension, the shallow flightiness of the women and the duplicity of the men.

The latter seems particularly pointed these days, when Lies are peddled as Truth, News is deemed fake and hypocrisy runs rampant.

Both have been engaged in a lifetime of subterfuge Algernon calls “Bunburying.” When he wants to get away from the city (London), he visits Bunbury, his invented permanent-invalid relative in the country. And when Jack wants to escape to the city from the country, he has a convenient, dissolute ‘brother’ he needs to control.

Honesty isn’t high on anyone’s agenda in this rarefied world of cucumber sandwiches and tea cake. (“The truth is rarely pure and never simple,” as Wilde puts it).

Algernon’s valet, Lane (Daniel Harray, eminently funny in this role; less so as the odd, scruffy caretaker in the country), lies like a rug for his master.

The two young women who are the objects of the men’s affections – when they assume each other’s Bunburying persona, greet each other with wary looks, gritted teeth and charmingly insincere adoration.

Cecily’s governess, Miss Prism (Jane Ridley, whose indeterminate accent comes and goes), has been harboring a secret for nearly three decades. The Reverend Chasuble (Rodney Garner) claims celibacy but links up with Miss Prism at the end.

The only honest character – brutally, sometimes cruelly so – is Lady Bracknell (Helen Carey, low-key, and a little shaky on her lines the night I was there). She gets some of Wilde’s wittiest quips and barbs, and delivers them imperiously, with well-aimed, poison-tipped arrows.

Wilde didn’t have much reverence for anything – reverends and marriage especially. And those perspectives seem to be timeless.

Still, it’s nice to make an audience feel there’s some particular reason for mounting this classic at this time, the fourth presentation of the play at the Globe. Director Maria Aitken’s production is so straightforward and unoriginal, it makes one wonder.

But she certainly has a gorgeous sandbox to play in.

There is some clever stage business, but why the two country house-staff skip around when changing the second-to-third act scenes is inexplicable and out of character. Same with their staged, post curtain call high-five.

Fabio Toblini’s costumes are ravishing. The lighting (Philip S. Rosenberg) and sound (Fitz Patton) highlight the proceedings. The ensemble is strong, and the snappy pace and timing make the 2½ hours fly.

For an evening of pure escapism – riddled with biting, often laugh-out-loud wit – the play certainly lives up to the first half of its subtitle: “A trivial comedy for serious people.”

Only you can determine the accuracy of the other half.