“TURNING OFF THE MORNING NEWS” at OnStage Playhouse 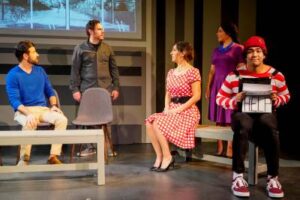 Durang is difficult. Especially when he’s in his unhinged, absurdist mode, and his black humor is focused on deadly serious subjects.

The playwright Christopher Durang has been poking our society in the eye for decades. He’s spent his life gleefully aiming poison darts at sacred cows and significant societal stressors: religion, politics, suburbia, family dysfunction, domestic abuse, mental illness and excessive use of weapons.

Especially this week, in the wake of the school shooting in Uvalde, TX, the focus on guns and the crazy desire to aim them at random people, is shocking and disturbing at best.

With his outlandish, over-the-top, ultra-eccentric characters and situations, which hit so very close to home, are we supposed to laugh or cry, scream or tear our hair out?

Even the play’s title is a provocation.

“Turning Off the Morning News,” which premiered in 2018 at the McCarter Theatre in New Jersey (Durang’s home-state), is so timely that the projection designer (Salomón Maya) at OnStage Playhouse had to update his shocking news images three times in the last three weeks before opening.

The loopy or frankly psychopathic characters break the fourth wall frequently, telling us (in the psychopath’s case), that he’s thinking of shooting some random people and then himself — maybe in a mall, or a theater.

His wife, the ditsy, polka-dot and plant-loving Polly (Carla Navarro, in delightfully daft costumes by Brad Dubious), thinks her husband is “lovely, but very sensitive.” Delirious? Demented? In deep denial? Well, she does acknowledge that “he has his ups and downs.”

He’s actually a dangerous whackjob, and his adopted son Timmy (Jaden Guerrero) knows it. Guerrero, a freshman at UC San Diego, is playing a 13 year-old because, we’re told, the cast didn’t want to have to deal with a real 13 year old (it’s in the text).

Polly, who sometimes, like the bullies at school, calls Timmy Polly, is a hyperverbal dingbat.

“I need to talk,” she says, “because I find life so overwhelming.”

His housemate, Salena (Ray-Anna Young), the only normal-seeming, if underwritten character among the nutball adults, is not his wife. They live together because they’ve both experienced trauma — though his is far more macabre and inconceivable than hers. She’s Black, so racism raises its ugly head for a moment, too.

Another neighbor, Rosalind (goofy/funny Heather Warren) is terrified of the sun (a nod to climate change, one supposes), and the many basal cell carcinomas it has caused on her face. So she wears a pillowcase over her head at all times. It’s a KKK-kind of counterpart to the pig-head mask Jimmy wears when he decides that, depressed about the fact that he’ll never be a writer (he’s only written three sentences), he takes off on a killing spree.

These grotesque folks are cartoonish representations of our collective insanity, our personal and social fears and anxieties. They’re not as funny as they should be, and the current news cycle further dampens the humor potential.

Mental health (or the lack thereof) is at the heart of all of these characters, Warren says in her Dramaturge’s notes, and brochures for organizations that can provide help are available in the lobby.

Director Adam Parker (making a welcome return to theater after co-founding and helming the quirky but effective, youth-oriented Triad Productions a decade ago, then moving on to other ventures) puts emphasis on the most outrageously written characters, which are also the most Durangishly performed (by Navarro and Warren). The others are also plenty nuts, but not in a comical way.

Maya’s projections of the real news keep us grounded in the horrors of our daily reality. The set (Kristen Flores) is a pleasingly, if not whimsically, monochromatic, geometric design that looks part sitcom, part TV studio. The laugh-track adds to that sensibility.

To some people, Durang’s dark, acerbic humor is hilarious. But even in a preposterous setup, it’s hard to laugh at the grotesque madness we’re forced to confront every day.

Still, kudos to OnStage artistic director/producer James P. Darvas for always taking risks and chances, and always trying to provoke and wake up his audience to what’s going on around them, hoping they’ll be inspired to do something about it.