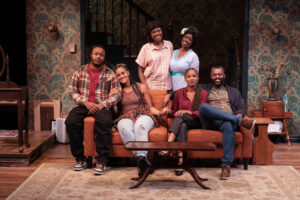 The rebels fight for civil rights — or their own. The Strivers try to marry up, or obtain education as a path to success.

Both branches are trying to cut loose from their roots and escape their shame: a patriarch who left the family with only his name, and a matriarch who flitted from man to man, ultimately abandoning her children to be raised by a bitter, scorned, icy and ultra-stringent grandmother (one of the strivers we meet at the outset; we never see the wanton mother).

The play likewise flits, back and forth in time, between the generations of sisters, one pair from the 1960s and their descendants in 2018.

Their roots run deep in the family home on Mud Row, a low-end Black neighborhood in West Chester PA, not far from Philadelphia. The area earned its name as the receptacle of sewage runoff and the cynical observation of “colored folks always bein’ the mud of the people.”

In the ‘60s, Frances (no-nonsense Joy Yvonne Jones) is aggressively picketing and demonstrating for a seat at the local lunch counter. Her sister Elsie (prissy Andréa Agosto) sets her sights on a college boy, someone who will raise her up.

In 2018, men enter the picture, mostly as faithful protectors (one with hugs, one with bats). For three months, intense-but-spiritual fighter, Toshi (excellent Rachel Cognata) and her hulking boyfriend Tyriek (solid Leo Ebanks) have been squatters in the ancestral home, which has been vacant for five years, since the death of Granny Elsie. After a life of drugs and crime, Toshi feels she’s changed, and is owed the peace of a place to call her own.

Unfortunately for her, the house was left to her sister, Regine (haughty Marti Gobel), who wants to be rid of the place and its memories (“this is the house of my teenage angst”). She and her husband, Davin (affectionate, optimistic Rondrell McCormick) are back to get appraisals and are ready to accept offers from developers who plan to turn the block into a parking lot.

Despite all the anger and resentment of the past, the Jeter women cling to their family credo of “Love, Fight, Togetherness.”

Cygnet Theatre and its skillful guest director, Delicia Turner Sonnenberg, are presenting a forceful production of a play that confronts racism, violence, gentrification and life choices, set against a backdrop of two periods of change for African Americans. But mostly, it’s about family, heritage and sisterhood.

The detailed set (Brian Redfern), with a large tree behind the house and a front yard of dirt and (symbolically) exposed roots, changes scene by scene, thanks to a very effective lighting design (Caroline Andrew), to look alternately fresh and frumpy. The sound is by Melanie Chen Cole and costumes by Regan A. McKay.

How this play came about is a story in itself.

It was commissioned by People’s Light theater in Malvern PA, situated not far from West Chester, as part of their New Play Frontiers program. In 2012, they chose six up-and-coming playwrights (Morisseau had not yet become a Tony Award nominee or a MacArthur “genius” grantee) and had them tour local neighborhoods so they could choose one to write about. The writers were then hooked up with community residents and a dramaturge.

Morisseau came up with six characters and two timeframes, but kept her eye on the women, which is surely what appealed to Turner Sonnenberg, co-founder and former artistic director of the female-centered Moxie Theatre. This is actually the third of Morisseau’s plays that Turner Sonnenberg has directed.

Although the sisters here are the focal point, this feels like an ensemble piece, with everyone pulling their weight — including the street-smart pugnacious man (Tyriek) and the trusting and ever-hopeful one (Davin). Each, like the women, is capable of vast reserves of love and loyalty.

“Nobody can stay stuck in the mud forever,” one of the men says. And despite being mired for generations, the sisters and their mates find a way to make peace with their past and move on.