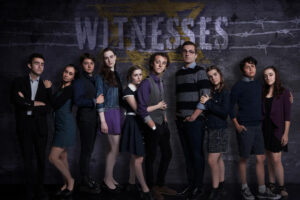 You might think that Anne Frank was the only teen who kept a diary of her experiences during the Holocaust.

Actually, there were hundreds of them saved and published, some recently fetching as much as $800 for a used copy.

This I learned from Jordan Beck who, 14 years ago, encountered a book of Holocaust diary excerpts written by young people, Anne Frank among them.

He couldn’t get those stories and emotions out of his mind.

Now, Beck, a long-time lyricist and producer, is managing producer of CCAE Theatricals, a new company based at the California Center for the Arts, Escondido (CCAE).

He conceived the new musical, “Witnesses,” based on five teen diaries. The show’s world premiere caps off the new company’s first full season.

The subject matter may be daunting, but the inventive production is technically complex and emotionally engaging.

The concerns of the young folks, while familiar to teens (crushes, bullying, arguments with parents or siblings) have the added anguish of bombings and the threat of death every day. The diaries could have been written today — in Ukraine.

These diarists, ages12-18, whether they were in Holland, Lithuania or Poland, were dealing with the encroaching Nazi onslaught, and the extreme anti-Semitism that forced them to leave school, prohibited them from using public transportation, made them wear a yellow Star of David at all times (a “badge of shame” identifying them as outsiders — and targets), and drove them into hiding, or prison-like ghettos (and later, work, detention or concentration camps).

The reports are gut-wrenching and heartbreaking. The dutiful writers try so hard to maintain hope, and to retain their faith.

The last time I visited the Anne Frank House, years ago, the informational display downstairs from the attic annex where she was one of eight people in hiding for 2+ years, featured newspaper articles from around the world, disputing the veracity of her story, debunking her diary, denying the entire Holocaust. (There’s now a full museum).

As if all the photos and newsreels and archival documentation — not to mention the ever-dwindling population of survivors — don’t give the lie to all that hate-filled denial, this new array of first-person reports offers added evidence of the realities of that time — and frighteningly reflects our own time, with fascism and anti-Semitism increasing at home and abroad.

In the show, I expected to meet five young people and hear their stories one by one. Beck’s initial idea was to recruit five different writing teams to use the words from the diaries for a song cycle.

When he reached out to Tony award-winner Robert L. Freedman (“A Gentleman’s Guide to Love and Murder,” which had its world premiere at The Old Globe in 2013) to write the book for the 100-minute musical, the piece assumed a different form.

Freedman created dialogue from the diaries and put the teens together (though they were in different countries and ranged in age from 12 to 18). He had them sing and interact as a group, interspersing their songs and thoughts, since there were so many commonalities.

That makes it a little harder to keep the characters and stories straight, especially since the ten talented performers take on multiple roles (perhaps a consistent costume element for each actor playing one of the five main diarists would help).

Also, since the tales start to sound similar after a while, some trimming is in order. There were at least four or five musical moments that could easily have signaled the end of the show — but then it went on.

Afra Sofia Tulley, who has Off Broadway and regional credits, is also a standout as Romanian-born 13-year-old Éva Heyman, singing songs by Carmel Dean (music) and Mindi Dickstein (lyrics).

Beck was most taken by the diary of 12 year-old Dawid Rubinowicz (played by Giovanny Diaz de Leon, a recent graduate of the San Diego School of Creative and Performing Arts). Beck felt a personal connection to Dawid’s story, so in collaboration with his songwriting partner, composer Gerald Sternbach, he wrote the lyrics.

Most of the songs are ballads or anthems; a few are a tad upbeat. Gwon’s haunting number, “What Will You Do?,” reminiscent of the “Cabaret” song, “What Would You Do?,” is directed pointedly to the audience. Gwon also wrote the show’s title song, “We Will Be Witnesses.”

Skillful musical direction is by Gerald Sternbach, who also handled the musical arrangements, and there’s an (unseen) but expert 7-piece orchestra, under the baton of Lisa LeMay.

Matthew Herman’s set is a character and a wonder in itself. An austere and imposing assemblage of gray and brown, wood and stone, it features elevating walls (on which evocative projections, by Andrew Nagy, are cast), a rising/falling doorframe, two trap openings in the floor, a turntable, and a suspended shelf of books, including the diaries. It’s a stunning creation of technical wizardry, beautifully enhanced by Zach Blane’s lighting and Jon Fredette’s sound.

This is not a history lesson, but it is a sometimes-painful reminder of what happened — and what could easily happen again.

We cannot turn our backs. We can’t ignore rising fascism, or the rescinding of rights and freedoms. Or senseless, needless killing of innocents.

We are all witnesses; we cannot look away. Not then. Not now. Not ‘over there’. Not right here. Not ever.

Everyone, young and old, needs to see this show.