“THE TAMING OF THE SHREW” at The Old Globe 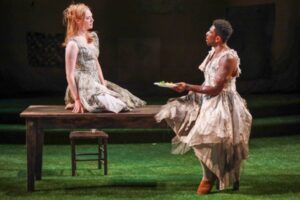 Shana Cooper, director of The Old Globe’s “The Taming of the Shrew,” is right, of course.

Despite the 430 years that have elapsed since William Shakespeare wrote the often-contentious play (one of his early efforts), we’re still living in a patriarchal, misogynistic society.

While the term “shrew” may have fallen out of favor, it’s been replaced by “ho” or “be-atch” and a raft of others. Even when spoken or sung in jest, more than a whiff of the pejorative clings to those highly-charged words.

There’s some indication that the play was even controversial in Shakespeare’s time. These days, some claim that, like “The Merchant of Venice” (and some say, “Othello”), it shouldn’t be performed at all.

But even at his most scandalous, Shakespeare almost always has something to tell us, something that still resonates, about human nature.

In her effort to “modernize” or update the piece (an earlier version of which premiered at upstate New York’s Hudson Valley Shakespeare Festival in 2018), anachronisms abound, as do various styles of comedy.

There are overblown characters and performances reminiscent of commedia dell’arte (16th century Italy; Shakespeare’s play is set in Padua), mixed with the hijinks of English pantos, Latinx pastorelas and actos, replete with pratfalls and clowning, bawdy suggestiveness, outrageous costumes (including cross-dressing and gender-bending), and contemporary songs used as commentary (“It’s Now or Never,” “Will You Still Love Me Tomorrow?”) some sung in Italian. There’s even a sly number from “Kiss Me Kate” (“Tom, Dick or Harry”), Cole Porter’s clever 1948 musical riff on “Shrew.”

Katherine’s final speech remains problematic and far too long (perhaps they could have split the speech and gender-bent it?), but Cooper has built a case for it by making Kate (referred to early on as “a hellion; half-mad; a fiend of hell; curs’d Kate” and worse), and the materialistic Petruchio (“I come to wive it wealthily in Padua”) stop in their tracks and fall for each other at first sight.

She recognizes that it’s all about gamesmanship for him, and she’s willing to play along, because she sees that she’s met her match.

Although we still cringe at the end when we hear her tell her fellow wives that they should “place your hands below your husband’s foot,” this Petruchio rejects the offer and kisses her hand instead. And then they run off to consummate their marriage.

That speech is too protracted and insistent to be snarky, sarcastic or jokey, but these two know what they know, so it barely matters what they say.

At the end, the irony is that, with all the wooing and competing and finagling for wives (mostly ones with substantial dowries), the only relationship that seems destined to be a functional marriage of equals is that between Kate and Petruchio. Both the other couples, close on the heels of their nuptials, already seem estranged and unhappy.

In this production, it’s clear that not just the men are trying to game the system. Yes, Kate’s father will sell her off to any bidder, but her younger sister Bianca (flirtatious Cassia Thompson) is no angelic goody two-shoes. She clearly manipulates her father and her various suitors, to get what and who she wants… and then turns out to be disappointed with her choice.

This Kate (compelling Deborah Ann Woll) is less shrewish than angry. And she has just cause. Her father, Baptista (Armando Durán) clearly favors her sister, undermines Kate at every turn, and just wants someone to take her off his hands, so that a clutch of men can fight for his more desirable younger daughter (the oldest must be bartered off first).

This Petruchio (impish, frisky James Udom) doesn’t start out with the swagger and self-aggrandizing bravado of most productions. And he’s not as physically and emotionally abusive as some (he does deprive her of food and rest, which is bad enough, but he doesn’t spank her or take particular delight in debasing — “taming” — her).

She has a realization at one point, that she’s never had to “entreat” or beg anyone for anything before. It’s something of an epiphany for her, which suggests that, like her sister, she’s been indulged and spoiled. Her single father hasn’t known how to deal with her headstrong manner and her unwillingness to conform to society’s expectations for girls and women; perhaps he’s let her run a bit wild. In that society, anger in women is unacceptable, and they’re punished for not adhering to the rules and mores.

Petruchio also flouts gender expectations (showing up late to his wedding in a bridal gown may be a bit much), but clearly, this is a coupling of iconoclasts. They’re hellbent on doing things their own way. Perhaps others will follow their lead. This is one way change happens.

The various acting styles (Felicity Jones Latta is amusing; Jesse J. Perez is funny but so very over-the-top), and the stylized moves and outré musical performances all make for a bit of a mishmash.

But there are a lot of laughs for the audience, which takes the emphasis off the trickier bits. Shakespeare purists will likely be less than amused.

Though “The Taming of the Shrew” has historically been considered a “problem play,” this production sweeps the problems under the astroturf and focuses on the fun.