“WHEN THE RAIN STOPS FALLING” at Cygnet Theatre 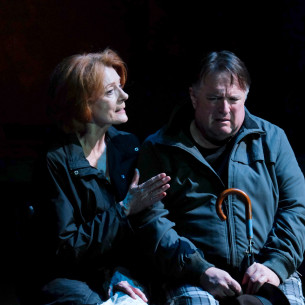 Some people always think the sky is falling. Even if the world doesn’t end, the future looks so bleak to them that it can’t be faced. So they check out, in one way or another – abandonment or suicide.

We meet a lot of those folks – generations of them – in Andrew Bovell’s masterfully intricate drama, “When the Rain Stops Falling.”

The recursive play is set in multiple timeframes on two continents – from 1959 to 2039, in London and various parts of Australia.

The language, like the characters’ names and their conversations, keeps circling back on itself. It’s all about fathers separated from sons, parents and what they don’t tell their children; death, fear, memory, destiny and legacy.

This fascinating, dense and complex piece of work may require more than one viewing for complete understanding. A genealogy map in the program helps. But it’s best to just sit back and let the saga wash over you.

The action begins and ends with a downpour, and the titular rain is a recurrent theme. In the first moments, a fish falls from the sky. Fish soup figures prominently over the years.

The set, lighting, costumes and Kevin Anthenill’s wonderful soundscape and original score transport us in time and place, and keep us grounded, even as we, like many of the characters, are suspended in uncertainty.

The ensemble is magnificent, each marvelous performer giving heft and depth to an intriguing character and an impressive array of emotions. Their words, phrases and movements repeat with ritualized regularity, as they try to unravel long-held secrets and understand who they are and where they’re headed, Like the remote and isolated Australian Coorong some of them inhabit, these two intertwined families have evolved as a fragile ecosystem, caught between land and sea, past and present.

If you can tolerate ambiguity and abstraction, you’ll want to journey into the dark, damp unknown along with them.