“GUARDS AT THE TAJ” at the La Jolla Playhouse 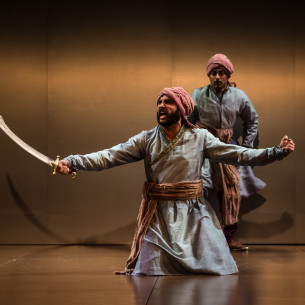 In his magnificent, Pulitzer Prize finalist, “Bengal Tiger at the Baghdad Zoo,” his probing mind and macabre humory were focused on the invasion of Iraq. In “Guards at the Taj,” his most recent creation, he goes further back in time – to 1648, on the morning of the unveiling of the Taj Mahal – 16 years in the making, built by 20 thousand men.

Here, once again, Joseph deals in dichotomies: loyalty and betrayal; power and powerlessness; slavishly following orders or wantonly rebelling; the suffering beneath the beauty.

All of this is embodied in two guards stationed at the monument’s entrance. Long-time friends, they’re forbidden to talk, or to turn around and look at the masterpiece behind them. Humayan is supremely dutiful, always trying to impress his father, the head of the Imperial Guards. Babur is a dreamer, a fantasist who imagines future inventions like airplanes, seatbelts, and even drone strikes. In their shared, shocking loss of innocence, both the rule-follower and the rule-breaker lose, in tragic but different ways.

In the mausoleum for his favorite wife, Shah Jahan wanted to create the most beautiful edifice ever made – and to make sure that nothing as beautiful would ever be made again. The way he ensured that, if legend is to be believed, is staggering and grisly. A structure of splendor becomes a human abattoir. (Joseph must have a thing about hands; there are behandings in both these provocative plays).

At the La Jolla Playhouse, associate artistic director Jaime Castañeda makes an impressive directing debut. His cast is excellent: the friendship portrayed by Manu Narayan and Babak Tafti is credible. The breakdown of their relationship is heartbreaking. But their spiritual and existential anxiety, written as a mashup of Laurel & Hardy and Beckett’s Didi and Gogo, should be more darkly comical at the outset, to offset the bloodbath to come.

The design is suggestive and evocative; the sound is especially noteworthy. At only 80 minutes, this fantastical play is not for the faint of heart. It brutality raises many disturbing issues, including the ramifications of extreme ambition and blind adherence to barbaric, autocratic command.