“UNCLE VANYA” at The Old Globe 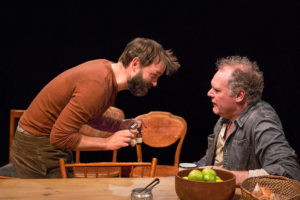 If you’re looking for something to brighten a gloomy day, “Uncle Vanya” might not be your play of choice.

On the other hand, the relentless unhappiness of the characters might make you value your own life, and change things while you can. That’s never an option for Chekhov’s creations; they wallow in their misery, but they are, for the most part, resigned to it.

The Old Globe commissioned a world premiere translation of the beloved Chekhov classic. There’s a freshness to this new version by esteemed Russian translators Richard Pevear and Larissa Volokhonsky, along with director Richard Nelson, that sounds modern and colloquial, although the play is still set in the late 19th century, when Chekhov wrote it.

Nelson has done something clever and intriguing with this production. In the intimate White Theatre, the actors don’t emote or project. They don’t even face the audience. Their characters, minus a couple from the original, just go about their daily lives, talking about their exhaustion and their unrequited love.

It’s as if we’re peeking through a window, watching what goes on behind closed doors, around the kitchen table.

The design staff was concerned that the audience wouldn’t be able to hear everything. So they suspended microphones just above the actors, and provided personal listening devices to the onlookers.

Vanya, his mother and his niece struggle to get by, in the country house owned by the blowhard professor, Vanya’s ex-brother-in-law, who has married a much younger woman, a beautiful, reluctant temptress named Elena, whom Vanya and the jaded doctor adore. The kind but homely niece, Sonya, is in love with the doctor, but he’s obsessed with a surprisingly timely environmentalism.

The cast is uniformly strong, and very human. But everything is tamped down here: the volume, the color palette, the sultriness and languor of Elena, the alcoholism and dissipation of the Doctor — which makes Vanya’s extreme outburst stand out that much more.

These complex characters are beaten down – by work, by boredom, by self-pity, by hopelessness. But they soldier on, even if, as Sonya sees it, the only opportunity for respite and rest is the grave.