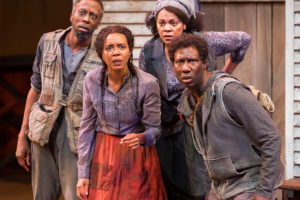 The unpredictable and unimaginable occurred regularly. Stress and distress gripped much of the nation.

Onstage, shows gained heightened relevance in view of the news. A line, a topic or a character could be topically reinterpreted. Some theaters chose to underscore the parallels..

One of the ubiquitous red baseball caps showed up in ion theatre’s excellent, decadent production of “Cabaret.” An over-long red necktie featured prominently in the opera-for-one, “Eight Songs for a Mad King,” inventively presented by Bodhi Tree Concerts.

Political subjects were inescapable: issues of race, gender, immigration and governmental repression reared their menacing heads, and gave us some of the most potent productions of the year.

Here are a few shows that chilled or thrilled me, and some that haunt me still.

Corporate downsizing was confronted in The Old Globe’s marvelous “Skeleton Crew.” A warped view of work took shape in the gorgeously gory “Kill Local” at the La Jolla Playhouse and the Roustabouts’ gripping world premiere, “Margin of Error.” Hershey Felder gave a political gay rights spin to “Our Great Tchaikovsky” at the San Diego Rep. The San Diego Opera’s stunning “As One” and Diversionary Theatre’s provocative “Ballast” zoomed in on gender identity. “InnerMission Productions looked at school discipline in “Gidion’s Knot” and autism at home, in “Falling.” And women’s rights were part of Lamb’s Players’ “Silent Sky” and “The Explorers Club.”

But it wasn’t all serious: I loved the deliciously wicked “Hand to God” at the San Diego Rep; the delightfully daft new musical, “Benny and Joon” at The Globe; and Cygnet Theatre’s marvelously malevolent “Shockheaded Peter.”

Theaters forced us to examine the lives of others and look at who we are. May the new year continue the inspiring, enlightening trend.