“TROUBLE IN MIND” at The Old Globe 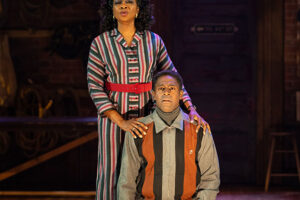 Some works of art don’t stand the test of time. Others, though created decades, or even centuries ago, feel like they could have sprung forth yesterday.

Happily for the art but sadly for the continued relevance, “Trouble in Mind” by Alice Childress, is a work that endures.

Though the sometimes-comic drama is more than a half-century old, it could easily have been penned by any of the 200 signatories to the 2020 indictment, “We See You, White American Theater,” put forth by theater People of Color.

Neither Childress nor the play ever got their due.

“Trouble in Mind,” which is about what it means to be a black theater artist in America, premiered Off Broadway in 1955, and ran for 91 performances. When it was successful enough optioned for Broadway, Childress was pressured to rewrite the ending, to make it more conciliatory and upbeat.

Bravely, defiantly, insisting on honesty and integrity in her writing, Childress refused.

In 1994, she died of cancer, at age 77, never having gotten to be the first Black female playwright to debut on Broadway. That distinction would go to Lorraine Hansberry (“A Raisin in the Sun”) in 1959, four years after Childress’ Broadway debacle.

What’s even worse, it took until 2021 for Childress’ play to appear on the so-called “Great White Way” (ironic, no?). The highly acclaimed Roundabout Theatre production ran on Broadway from November 2021 to January 2022.

An outstanding local production of the piece was helmed by Moxie Theatre’s founding artistic director, Delicia Turner Sonnenberg, in 2015. Now a resident artist at The Old Globe, Turner Sonnenberg gets to revisit the play, directing a robust all-Equity cast (plus one student, Maggie Walter,) from the Old Globe/University of San Diego Shiley Graduate Theatre Program).

This is a thrilling production of a moving, infuriating, gasp-inducing work of theater that exposes the hypocrisy, bigotry, white privilege, humiliation, subjugation, suppressed anger and bowing/scraping compromises that Black performers have had to endure in white-dominated theater for ages.

A handsome, young Black actor, John Nevins (Michael Zachary Tunstill), a budding movie star purportedly based on Childress’ friend, Sidney Poitier, is making his first Broadway appearance in “Chaos in Belleville,” a troubling, deeply disrespectful and unrealistic play about voting rights and a lynching in the South.

John is being schooled by theater veteran Wiletta Mayer (marvelous, musical, riveting Ramona Keller) in exactly how to kowtow to the white folks.

We watch the more experienced Black performers (genuine, convincing Victor Morris and beautiful Bibi Mama, both excellent) do just that, while among themselves, they bicker and complain, mostly about being relegated to playing only wood-whittling, moronic men and maids or Mammies invariably named for flowers (Gardenia, Magnolia, Petunia) or jewels (Ruby, Pearl, Opal).

The white director (forceful Kevin Isola), also making his Broadway debut, is autocratic, condescending and cruel, even to his hapless white stage manager and theater devotee/doorman (Jake Milgard and Tom Bloom, both compelling). The frequently-hired white actor in the play (frighteningly credible Mike Sears) is generally clueless and racially insensitive.

We almost feel a scintilla of sympathy for the director when he relates his own trials and hardships in the business. But then, in one stunningly racist comment, he gives himself away.

And that’s when the leading lady, Wiletta, snaps. She’s mad as hell and she’s not gonna take it anymore. Like the playwright who created her, this strong-willed woman will no longer settle for a less than honest representation of Black people in theater.

How this all plays out is up for interpretation at the end. And that’s just the way Childress wants it.

Turner Sonnenberg and her cast and creative team (period-perfect costumes by Nicole Jascinth Smith; effective lighting by Sherrice Mojgani and sound by Luqman Brown) are true to the intentions of the play and the inescapably, distressingly similar realities of today.

It’s an unsettling experience but it shouldn’t be missed.