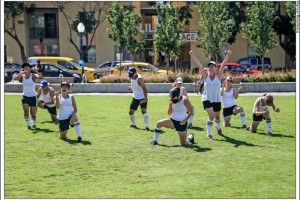 “Trolley Dances” is a local treasure.

For 18 years, Jean Isaacs and her San Diego Dance Theater (SDDT) has been taking audiences all over the city (wherever the trolley runs): out to SDSU, down to the border, in midtown and East Village. Viewers watch short dance performances at various locations at or near the trolley station, they hop on again, go a few stops and get off for the next presentation.

This year, the dance journey started in Barrio Logan and followed the Blue Line to the Museum of Contemporary Art, ending at the lovely Fault Line Park. The locales for the site-specific work were varied and evocative.

Isaacs herself choreographed two of the six pieces, which displayed her light-hearted, whimsical side. Humor was also palpably present in the work of New York-based Monica Bill Barnes, a frequent returnee to Trolley Dances, who was a student and mentee of Isaacs at UC San Diego.

The intention behind Trolley Dances is to bring dance to the far-flung reaches of the city, and bring more people to dance. Auditions are open, which means newbies and students and non-professionals of various ages, types and sizes, may be cast.

All that is both commendable and exhilarating. But this year, as in some others before, there just wasn’t enough dance. There were poses and moves, occasional lifts and interactions (sometimes with the audience). Perhaps some of the lack was due to the wide range of experience and expertise in the dancers. But it was also true of Barnes’ work, which was choreographed for the talented pros of Isaacs’ troupe. Her simulated low-end, low-rank baseball team is clever and cute, but clapping and rhythms took precedence over dance.

One post-modern piece, “Follow us Here,” choreographed by SDSU professor Jess Humphrey, seemed random and impenetrable, as 14 dancers caromed around the lobby of the San Diego Continuing Education César Chavez Campus. The range of ages and sizes was impressive; some of the performers are from the Aging Creatively program. Audience members were invited (in the program) to “behold, follow, leave or find any dancer or dance.” This made for a lot of spontaneity (mostly, getting out of the way of oncoming dancers), but it didn’t promote continuity or comprehensibility.

Two pieces – “attempts to define,” created by SDDT company member Zaquia Mahler Salinas in collaboration with her eight dancers, and “Finding Center,” a solo work by Bill Shannon, would have benefited from musical accompaniment (the faint background music for Salinas’ work was completely lost in the cavernous main hall of MoCA). The theme was considered in various ways, beginning with the spoken words, “Say it out loud.” While interacting in smooth, lyrical moves, in and around the evocative sculptural installation of Ruben Ochoa, the dancers spoke, sometimes simultaneously, about their identity, offering some seemingly personal details. The eight musical selections listed in the program, from Prince to Rascal Flats to Beethoven, would undoubtedly have contributed.

The work of award-wining Pittsburgh choreographer/dancer  Bill Shannon is more performance art than dance. Born with a bilateral degenerative hip deformity, Shannon has developed a way to express himself through movement by skateboarding on (psychedelic green) crutches. His pursuit of handi-capable art is praiseworthy, but this presentation seemed to be more about clowning (and some mime) and balance and control than about dance.

Which brings us to Isaacs’ two irresistible works.  The show opener, “Me and My Car,” was all about how people seem to resemble their wheels in one way or another (a riff on the noted similarity between pet-owners and their pooches). The piece was staged in the parking garage of the Continuing Ed campus, so working vehicles could actually be featured and danced on (and at the end, driven off).

The California Beach Girl was in a Mustang convertible, the white-suited Asian professional was in a white Prius, and the two scruffy and unruly guys were in an off-road jeep and a beat-up truck. It was cute and amusing and inventive, but again, did not contain that much dancing.

Same for the penultimate piece, “Up a Creek with Ten Paddles.” Playfully danced to Wagner’s “Ride of the Valkyries,” nine agile performers cavorted over the rocks in explorer garb, hiking boots, knit caps and bright Mae Wests, paddling away, striking poses and carrying a (spewing) Brunhilde. Fun and funny.

Overall, as usual at Trolley Dances, a good time was had by all. But personally, I prefer a little more dance in my dance.