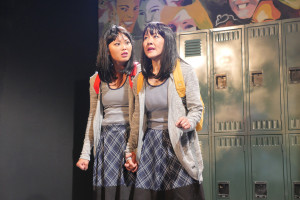 Playwright Jiehae Park, an alumna of UCSD, seems to have taken the weird sisters’ incantation in “Macbeth” – “double, double, toil and trouble,” rather literally. Riffing on Shakespeare’s work, she created “peerless” in 2015, focusing on a pair of identical twins. She dubbed them L and M – single-letter initial stand-ins for Lady Macbeth and her mate.

She also drew from the twisted true story of the Gibbons twins of Wales, who had a private language, spoke to no one, descended into a life of crime and in 1993, sacrificed one for the good of both.

Park’s L and M are 17 year-old suburban high schoolers, angling for a position in a coveted College. In the cutthroat world of college admissions, they’ll do absolutely anything to ensure their destiny, which is foretold by the spooky, witchy Dirty Girl. They’ll use their minority status, stagger their applications, even relocate to the Midwest to enhance their Ivy League prospects.

Then the geekiest guy in school snags Early Decision acceptance instead of the twins; nefarious plans and tragic outcomes ensue.

Park’s play is dark, menacing and brutal – but it’s also very funny. Her writing is smart and sharp, and she references Shakespeare in slyly imaginative ways.

The marvelous scenic, sound, costume and lighting design evince a hint of humor in every deliciously sinister decision.

Love can inspire despicable acts. Identity can be slippery. Ambition, guilt and betrayal can be deadly. But we knew that from Shakespeare. Now, we see it all anew, through this fresh, timely and gleefully perverse prism.