“THE YELLOW WALLPAPER” from Write Out Loud 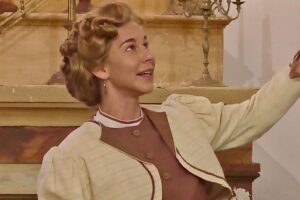 VENUE:  Write Out Loud at the Tenth Avenue Arts Center

There’s been a lot of talk about the patriarchy lately, especially in relation to men making decisions and laws that govern women’s bodies and lives.

We thought we’d gotten past all that years ago, but it keeps rearing its ugly head.

Charlotte Perkins Gilman knew all about it when, in 1897, she wrote and published (in the New England Magazine, after others refused to print it), her timeless short story, “The Yellow Wallpaper.”

In 1913, The Forerunner printed her article called “Why I Wrote ‘The Yellow Wallpaper,’” an (undated) excerpt of which appears in the program of Write Out Loud’s dramatic presentation, as part of their new program, Lit Alive. A companion solo piece, “Ripples from Walden Pond,” narrated by Henry David Thoreau, alternates with this one, through December 10).

In this Author’s Note, Gilman describes her own “severe and continuous nervous breakdown, tending to melancholia,” and describes the “noted specialist in nervous diseases” who assigned to her the much-used “rest cure,” which confined women to live “a domestic life,” and “never to touch pen, brush or pencil again,” (“for as long as I live,” she continues in the original).

After three months of this regimen, she confesses to being “near the borderline of utter mental ruin.”

She wrote the story to help other women avoid this fate.

In her explanatory article, she names the physician who treated her, but feminist scholars have since suggested that her tale was actually an indictment of her controlling, condescending first husband.

The story, and its dramatization (presented exactly as written), combines both versions.

Th unnamed woman in “The Yellow Wallpaper” is being treated with the “rest cure” by her husband, a doctor.

He says her problem is “temporary nervous depression — with a slight hysterical tendency” (“hysteria,” a frequent Victorian diagnosis for women, regardless of the ailment; was linked to the uterus).

By today’s deeper knowledge and understanding, it would seem that she’s suffering from post-partum depression. She doesn’t feel capable of taking care of her newborn son (“it makes me so nervous”); her husband thinks that she, like all women, isn’t capable of much.

He sentences her to three months in an old colonial mansion, and forbids her from working, reading, writing or socializing with the outside world.

She’s virtually imprisoned and her husband is rarely there. Her brother, also a physician, looks in occasionally, but he’s of the same mind, seeing women as passive, sickly and weak.

With no mental or sensory stimulation, she becomes obsessed with the peeling wallpaper in the former nursery. She loathes the room, describing the wallpaper as “repellent, almost revolting” in color, with a “yellow smell” and a “bizarre and disturbing pattern.”

Over a series of scenes, diary entries in a book hidden away where no one can see it, we watch her unravel, her mind unspooling into madness.

Some have viewed the story, which has been adapted numerous times — on radio, TV and film — as Gothic horror. To others, her crawling over her passed-out husband at the end is symbolic of the beginning of her self-assertion and empowerment — breaking out like the woman behind bars she sees in the wallpaper pattern.

Either way, it’s a horrifying journey.

Rachael Van Wormer, unlike her hapless character, is in total control. She floats effortlessly from insightful to delusional, gradually peeling away her confining clothes layer by layer, ultimately removing the constrictive corset.

It’s a brilliant, tour de force performance, excellently directed by Veronica Murphy (artistic director and co-founder of Write Out Loud) and beautifully designed by Alysa Kane (without any yellow!), with lighting by Nathan Peirson.

Van Wormer has said that the piece has “haunted and thrilled and inspired” her since she first read it at age 18.

The play is unequivocally creepy and chilling (here each scene is introduced by increasingly frenetic piano music); it’s terrifying, infuriating and heartbreaking.

You shouldn’t miss it.