“RIPPLES FROM WALDEN POND” from Write Out Loud 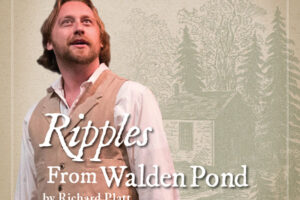 VENUE:  Write Out Loud at the Tenth Avenue Arts Center

That’s how long Henry David Thoreau (1817-1863) spent in the little 10’x15’ cabin he built on the beautiful, wooded Walden Pond near Concord, MA, where his family lived. The land was owned by his generous friend, essayist and philosopher Ralph Waldo Emerson.

Thoreau spent most of his time “sauntering,” immersing himself in nature, reading and writing (including a first draft of his masterwork, “On Walden Pond,” still in print and widely read).

He was thought of as an isolated, lonely hermit. But the fact is, he went into town frequently, his mother and sisters brought him food and clean clothes, and he often returned to his family home. He even hosted a large picnic for an abolition society.

None of this made it into “Ripples from Walden Pond,” a solo play by Richard Platt. But lots of other information did.

In the piece, Thoreau (which, he asserts, is pronounced THURR-oh) comes back from the dead to speak to modern audiences.

And he has a lot to say.

The renowned writer was a philosopher, poet, natural historian, environmentalist, abolitionist (he once harbored a runaway slave, and he publicly defended the controversial abolitionist leader, John Brown). He was also a major proponent of nonviolent resistance. He said that his book, “Civil Disobedience,” inspired Mahatma Gandhi.

What we learn from the Harvard graduate and failed teacher is how to live a good, just life: with an appreciation of nature and a public and social commitment to the next generation.

Those are noble aspirations. His thoughts on personal freedom are a little harder to swallow.

He believed that people (most of them, he said, “living lives of quiet desperation”) should reject the state, society and laws, to rely only on nature and the self. His motto was “Government is best when it governs least.”

This landed him briefly in jail one time, for refusing to pay the poll tax; he considered charging to vote unjust.

Some of his thoughts on government persist in certain quarters today.

But actor Steve Smith makes him lively company — especially when he’s excitedly enacting the wonders of nature (a war of ants, for example).

The first act features a good deal of speechifying but, under Veronica Murphy’s direction, the second act moves quickly and is most enjoyable.

The running time is posted as 55 minutes, which would be perfect. But with an intermission, it stretched to 105 minutes the night I was at the Tenth Avenue Arts Center.

Playing in repertory with a dramatization of the chilling story, “The Yellow Wallpaper,” both excellently presented and fully designed solo shows represent a new program of classic literature performances, Lit Alive, from Write Out Loud.

The set is spare, but the sound (Kevin Athenill) is wonderfully evocative.

“Life,” Thoreau tells us, “is fleeting, and beauty should be savored.” And “If you don’t live what you believe, then you don’t believe anything.” His advice, “Let yourself step to the music that you hear.” You must “Love your life.”

Words to live by.