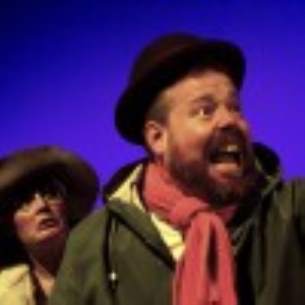 A Chilly Midsummer Story: “The Winter’s Tale” at Intrepid Theatre

It’s the latest initiative from Intrepid Theatre Company, a stripped-down Bard-work, without elaborate sets, props or costumes. The focus is just on the language. That intention is commendably realized in the company’s inaugural ‘Unplugged’ production, “The Winter’s Tale.”

It isn’t an easy play, but Intrepid has never taken the easy route.

Consider the show that’s running in repertory with this one: “The Quality of Life,” a rich, deep drama concerning, love, marriage, medical marijuana and assisted suicide (among other things). The Intrepid production is superlative (see review here: http://timesofsandiego.com/arts/2015/07/07/what-does-quality-of-life-mean-play-considers-the-options/) , and though it isn’t a thematic or stylistic matchup with “The Winter’s Tale” (which some consider a comedy), it does showcase the pluck and versatility of the company.

“Winter’s Tale” is one of Shakespeare’s later works, called “problem plays” (because they don’t fit neatly into the comedy-tragedy-history categories). Not only is it tonally and structurally problematic, it’s a bit schizophrenic:   the first half is a tragedy set in wintry Sicilia, focusing on the mad, unfounded jealousy of the King, Leontes , who accuses his wife of rank infidelity with his closest friend. The “green-eyed monster,” in an even worse temper than in “Othello,” causes the death of Leontes ’ wife, Hermione, and his young son, Mamillius , and the banishment of the newborn daughter Leontes insists isn’t his. In the transition between the two disparate parts of the play, a man is savagely eaten by a bear (mercifully, offstage).

After Time appears to tell us that 16 years have elapsed, we find ourselves in sunny, summery Bohemia, where a light comedy ensues, replete with songs; pastoral, celebrational merriment; silly disguises; and a scheming comical conman/cutpurse, Autolycus . In true comic form, the story ends in marriages – and even miracles. Old friends and families are reunited, a peasant turns out to be a princess, the king suffers and repents, and his wife, magically, comes back to life (a stunning scene here).

All this complexity – and some 20 characters – are enacted by a cast of just six (plus young Merrick Hanna as Mamillius ).

Intrepid pulls it off with aplomb. The language, as promised, is crystal-clear (if a bit too rapid at times, in the interest of conversational verisimilitude). Co-directors Sean Yael-Cox and Brian Rickel don multiple hats, both literally and figuratively, and in various roles, they’re a highlight of the production. Yael-Cox portrays both King Leontes and the mischievous, nefarious clown, Autolycus . As the first, he’s formidable, though his transition from loving husband/father to monstrous tyrant could be more highly differentiated. He tends to bellow in his anger, but his despair is palpable and heart-breaking. As Autolycus , he’s a hoot:   a guitar-strumming trickster, nimble in his pickpocketing and amusing in his rambling use of Shakespeare’s words applied to rock melodies from the likes of Elvis, the Beatles and the Stones. Funny stuff. Okay, a bit daft, but it works.

As the King of Bohemia, Leontes ’ bestie, Rickel is excellent, even in his bearded, Tevye -like disguise, and amusing as the good-hearted if dim-witted shepherd, Clown. Jo-Anne Glover is solid, and then ghostly, as the admirable Hermione, and Jacque Wilke is forceful as the staunch truth-teller, Paulina, who risks the ire of Leontes to defend his wife.

Marco Rios and Erin Petersen are sweet as the young lovers, who become catalysts to the reunion and redemption at the end.

Without the distractions of extravagant staging and production values, one can really hear the play and perhaps even more readily accept its dichotomous (and fantastical) nature.

So far, this ‘Unplugged’ experiment is a success. I recommend the production for Shakespeare novices, to acquaint themselves with a difficult and not-so-often-produced play. For Shakespeare aficionados, it’s a skillful romp — but the dramatic moments are certainly given their due heft and gravitas.

Tyranny, tragedy (a little misogyny), tears and laughter, and even hope for humankind. That’s a tall order, but it’s all packaged efficiently and effectively by the Intrepid company that continues to live up to its name.

The Intrepid Theatre production of “THE WINTER’S TALE ” runs through August 2 at the Carlsbad Village Theatre, 2822 State St.

Performances are Thursday at 7pm, Friday-Saturday at 8pm, Sunday at 2pm