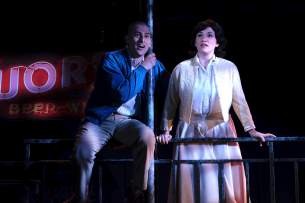 It’s amazing that a show with such a cringe-inducing premise could have so many tender moments.

“Dogfight,” a musical based on a 1991 film, refers to a cruel game in which Marines bet on which of them can snag the ugliest date.

Eddie Birdlaces tarts out on a Greyhound bus heading for San Francisco, returning from his deployment in Vietnam. He’s thinking back to November 21, 1963, when the Dogfight was the last hurrah before his platoon shipped out to Southeast Asia. It all happened on the day of JFK’s assassination, though that’s never mentioned. An odd choice for composer/lyricist Benj Pasek and Justin Paul, and book writer Peter Duchan.

But otherwise, they got everything just about right in this captivating musical, chock full of testosterone, bravado and misogyny in the first act. But after Eddie, a cocky Buffalo-born fast-talker, meets Rose, a shy, guitar-playing naïf, everything changes for both of them. He persuades her to come to the party, though he soon regrets it. Turns out, it’s her first date. When she finds out about the game, she’s furious.

The second act is all about Eddie’s repentance, and their awkward fumbling toward rebuilding a romantic evening. Then he’s off to war, which he and his buddies think will be a great adventure, from which they’ll be welcomed home as heroes. It doesn’t work out that way.

There’s something both ugly and beautiful about this show, which juxtaposes the extremes of human objectification and personalization. It’s hard not to get caught up in the tender, tentative love story, especially after the raucous male-bonding numbers. The enigmatic ending is intriguing, too.

The timelessly appealing music, deftly played by a six-piece offstage band, ranges from folk to early rock and beyond.

“Dogfight” may start with a snarl, but this puppy has unexpected depth, breadth and heart.

“Dogfight ” runs through August 23, at Cygnet Theatre in Old Town.