“Side By Side By Sondheim” – North Coast Repertory Theatre 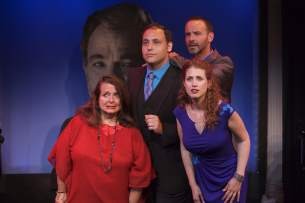 They say every picture tells a story. But not every song. Unless it’s written by Stephen Sondheim, musical theater’s most revered living composer/lyricist.

With his dazzling wordplay, he conveys a character, an emotion, and a very particular moment in time. Sondheim has actually said that, without those pieces of information, he can’t even begin to write a song.

Many evenings of theater have focused on his funniest and most poignant creations. The first such revue was in 1977, “Side by Side by Sondheim,” which features songs from the master’s early work, including “A Funny Thing Happened on the Way to the Forum,” “A Little Night Music,” “Company” and “Follies,” as well as some with lyrics by Sondheim, but music by other composers, like Leonard Bernstein’s “West Side Story” and Jule Styne’s “Gypsy.”

The setup is three singers, two pianos and a Narrator. At North Coast Repertory Theatre, under the clever and whimsical direction of David Ellenstein, the singers are superb – in solos, duets and trios, with the bonus of an excellent Narrator – Nicholas Mongiardo-Cooper – who can sing, too, bringing passion to the iconic anthem, “Being Alive.” Angelina Réaux gets the classics, “Send in the Clowns” and “I’m Still Here,” and she brings a singular spin to both. Rena Strober is hilarious in “Not Getting Married” and heartbreaking in “Losing My Mind.” She and Randall Dodge pair marvelously in the cynical marital screed, “The Little Things.”

Dodge is inspired in his every number, including his drag turns. A consummate performer, this is his San Diego swan song, as he moves his family to the Midwest. Our enormous loss is their gain.

The wide-ranging two-act show adds up to one giant musical delight – with all the genius, wit, sophistication, elegance and sly humor of Sondheim, backed by outstanding accompaniment and enjoyable projections. The sound is crisp and the choreography is simple but serviceable.

Not all singers can sing Sondheim. Those who can bask in the brilliance. Now you can, too.

“Side by Side by Sondheim ” runs through August 16, at North Coast Repertory Theatre in Solana Beach.