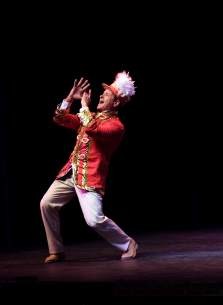 The art of the con and the power of love: “The Music Man” at Moonlight

“You gotta know the territory.”

It’s a through-line in the beloved Americana musical, “The Music Man.” And it certainly applies to its magnificent creator/composer/lyricist, Meredith Willson, who was born in the state where he set his show – small-town Iowa (his native Mason City became the fictional River City). He was also a flutist and piccolo player in the great John Philip Sousa’s band, a thrilling experience he recreated in the show-stopping “Seventy-Six Trombones.”

At Moonlight Stage Productions, “The Music Man” is getting a rousing staging by director/choreographer John Vaughan, with the largest company ever on the Amphitheatre stage: a whopping 54 performers who, when added to the impressive 22-piece orchestra, total an apt, noteworthy 76. There’s a bold, brassy sound from the get-go, and an infectious energy throughout.

Everyone’s clearly engaged and inspired, but the production felt a little forced the night I was there. The terrific, rhythmic opening, “Rock Island,” was a little sluggish. And there was a tiny bit of disappointment in two Broadway veterans at the center of the action: agile David Engel as the fast-talking huckster, Harold Hill, who falls hard for elusive Marion the Librarian (Alessa Neeck). Both sing and move beautifully, and their connection is credible, but the night I was there, they were a little less compelling and charismatic than anticipated.

All the secondary characters are strong, especially Bryan Banville (frequently seen at Moonlight and Cygnet, but rarely in such a high-profile role) as Marcellus “Professor” Hill’s partner in crime (or at least his post-con getaway facilitator). Here, he gets to show his prodigious singing and dancing talents. Jim Chovick and Tracy Lore are great fun as the bumbling, word-mangling Mayor and his gossipy, artsy-fartsy wife. Susan Stuber is wonderful as Mrs. Paroo, Marion’s wise Irish Mom, and Elliot Weaver is cute as young, lisping Winthrop Paroo, who sparkles in “Gary, Indiana.” Also adorable: Maxine Sutton as Winthrop’s not-so-secret admirer, Amaryllis.

Always a highlight of the show: the barbershop quartet, which is first-rate here. The singing is potent throughout; the choreography and dancing are robust.

This 1957 cornpone classic is all about the power of imagination, belief, music and, of course, love. And with knockout ballads like “Goodnight My Someone” and “Till There was You,” and rousing big-cast numbers like “Ya Got Trouble” and “Seventy-Six Trombones” (played, at the end, by either the visiting Vista   or Rancho Bueno Vista High School marching band), how can you lose? The show’s a perennial winner, and this production’s a surefire contender.

Performances are Wednesday-Sunday at 8pm (no performance Wed. 7/29)