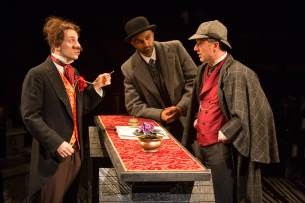 You don’t have to “Brush Up Your Shakespeare” to enjoy “Kiss Me, Kate.” But the more familiar you are with “The Taming of the Shrew,” the source of this brilliant 1948 musical, the more you’ll relish it.

The clever book is by Sam and Bella Spewak, with its crafty play-within-a-play structure. The gorgeous score is by Cole Porter, smart/satiric wordsmith extraordinaire. Darko Tresnjak, former artistic director at The Old Globe, now head of Hartford Stage, helms this dazzling co-production.

The show is chock-full of double entendres. Tresnjak has chosen to underscore and highlight the innuendo, presumably as part of his effort to update the comedy. The result is not necessarily puerile, but it’s definitely penile, as if the suggestive lyrics and Elizabethan codpieces weren’t enough. There’s all manner of low physical comedy, and even phallic-shaped arches painted on the two multi-windowed, towers that flank the set during the show scenes.

We’re watching a second-rate traveling theater company touring its raggedy production of “Shrew.”   The two diva leads, playing Shakespeare’s harridan Katherine and blowhard Petruchio, are a divorced duo who can’t live with or without each other. Their offstage characters are as overblown as their onstage ones. They take their battles and jealousies into the show, which also inadvertently features two hilarious gun-toting thugs. In addition, there’s a wonderful secondary couple, the squeaky-voiced sleep-around starlet and her Bad Boy hoofer beau.

But all the characters are played so over-the-top from the get-go, there’s no room for nuance. So we don’t care too much about any of them.

Fortunately, they all sing marvelously, so the spectacular music carries us along. Every main character gets a sizable number, with “Tom, Dick or Harry” and “Always True to You in My Fashion” as show-stoppers. The dancing is exceptional, as is Peggy Hickey’s superb choreography.

It’s hard not to get sucked in by this effervescent production, with its endless theater in-jokes and its excellent costumes, lighting, sound and musical accompaniment. For the Globe, it’s another opening, another big summer show.

“Kiss Me, Kate ” runs through August 9, in The Old Globe Theatre in Balboa Park.