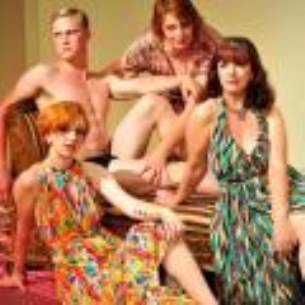 Some mythical goddesses have done some very ungodly things… like castrating men, or cutting their heads off, or eating them alive.

Three Sisters (Melissa Fernandes, Rae K. Hendersen and Devlin) and two men (Michael Parrott as Guy and Erik Dugan as Adonis) stand up at Moxie Theatre (now reduced from 132 seats to 99, for Equity contract purposes), face the audience, center stage on a plinth/pedestal, and tell stories of goddesses from a wide swath of ancient cultures, from India to Egypt to Japan, from the Biblical Lilith (a proto-feminist who was conveniently left out of the Bible), to the ultimate Bad Girl, Kali, Hindu goddess of death and destruction (though the Native American Grizzly-Woman is pretty grizzly, too).

The didactic narrative information is both enacted (often in very broad comic strokes) and illustrated (projection design, more like a slide show, by David Scott), with photos, paintings and pictures of the mythical goddesses and some of their real-life counterparts, from historical screen divas like Bette Davis to power-wielders of today: Sonia Sotomayor, Ruth Bader Ginsburg and Hillary Clinton.

Besides the lack of drama (and what’s up with the wide-ranging, unrelated accents and impersonations?), it’s not really clear what the point is. These potent, dominant females were once revered, but were also typically subjugated by males. So, when they brandished their supremacy, was it just to denigrate and destroy the opposite sex? Is that really the kind of power-wielding we want? Did they triumph in the end? Is that sort of ‘badness’ supposed to be commendable? And what’s the link to today’s power players? The piece doesn’t really answer these questions.

The interlaced songs are by local blues/jazz goddess Candye Kane, who appeared in her own life-story in Velasco’s earlier effort, “The Toughest Girl Alive,” also produced by the Moxie femmes.

Velasco has done some excellent choreography for local productions, but he just isn’t a playwright (not as easy a task as it may seem).

He’s amassed a talented ensemble, who can certainly put over a song (the work of ace arranger Steve Gunderson only shines through in a few ensemble harmonies). But they don’t have much to do except assume a (static) position and sing – and frequently change costumes (imaginatively designed by Kate Bishop).

The standout is Fernandes, who’s by far the best actor of the group, playing kittenish, sexy, angry and evil with equal aplomb – and knocking it outta the park vocally with songs like “The Sun is Gonna Shine” and the evening’s most beautiful ballad, “Cuts Like a Knife” (no song titles listed; I’m just riffing on the lyrics). Fernandes may be San Diego’s most under-used and under-valued performer. She also moves the best of the bunch, as does Parrot, a funnyman with a rich voice who’s been appearing in varied productions around town. Devlin, Henderson and hunky Dugan get their moments, too (though he could articulate and project more clearly).

It’s not a fleet production, even at 100 intermissionless minutes, and without a dramatic drive, an arc or a clear intention, the evening tends to plod on, goddess after goddess, story after story. With so many, it’s hard to process or remember any. This was an idea, an experiment that ends Moxie’s 10th anniversary season on a note of female empowerment (not always of a positive sort), even though it comes across as a yell rather than a roar.

Performances are Thursday at 7pm, Friday-Saturday at 8pm, Sunday at 2pm