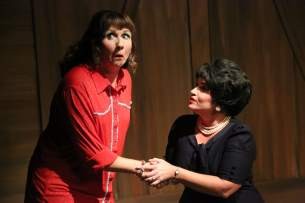 She sold 10 million albums in 2005, though she’d been dead for over 40 years. Patsy Cline recorded timeless songs like “Crazy,” “I Fall to Pieces” and “Walkin’ After Midnight.”

“Always…Patsy Cline” is a 1988 jukebox musical framed as fan-mail, a love-note from an adoring devotee who got to meet her idol one night in 1961.

That part of the show is true. Houston housewife Louise Seger actually did interact with Patsy Cline directly, and after some late-night bonding, they continued to correspond for the last two years of Patsy’s life, up to her tragic plane-crash death, at age 30.

As conceived by Texan Ted Swindley, this is Louise’s story. Recalling that night 30 years ago, Louise gushes, burbles, recounts and rehashes, while attending Patsy’s concert or listening to her on the radio, which offers opportunities for some 27 Patsy Cline songs.

Though the show has been seen in San Diego before, there’s one new element here: This marks the directing debut of Melinda Gilb, a beloved local performer who has actually played both roles in this two-hander. She does a commendable job, especially with Louise, who’s charmingly, engagingly and delightfully inhabited by Susan Bray.

The more problematic role is Patsy Cline, who’s something of a singing prop in the show. She barely moves, rarely talks, and changes costume often. Mostly, she just stands there and sings.

Debbie David has an appealing voice, probably more smoothly trained than Patsy, who confesses that she “can’t read music and doesn’t even know what key” she’s singing in. But there was a heart-piercing, raw-emotion quality to her voice that’s hard to replicate. You knew she’d felt all the anguish she sang about.

The honky-tonk band is terrific, but the show would be better shorter. Still, for those who like old-time, torch-song country singers, and a fan’s fantasy-come-true story, this is just the ticket.