“The Quality Of Life” 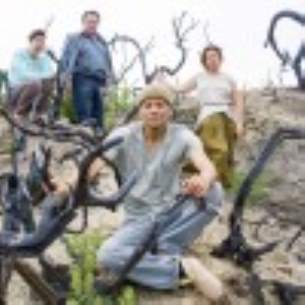 What does “Quality of Life” mean to you?   This play considers the options

Pain, loss and grief: How to live with them, how to move on from them.

Those questions are at the heart of the gut-wrenching drama (with a welcome slice of comic relief), “The Quality of Life,” by Emmy Award-winning L.A. writer Jane Anderson (“Mad Men”), now getting its San Diego premiere in a knockout production at Intrepid Theatre Company.

Jeannette (exhilarating DeAnna Driscoll) is a hippie-dippy Northern Californian who adores her husband. It’s the two of them against the world of late: a recent wildfire has demolished their home, and their beloved cat has been missing ever since. (A bit of stage time goes to the excruciating consideration of what to take at the moment of evacuation).

Now the couple is living on their ravaged property in a yurt, displaying the mangled remains of their possessions as art pieces, suspended from a giant tree, in a barren yard otherwise adorned with Tibetan prayer flags (this setting was inspired by close friends of the playwright, who made art from the remains of their fire-razed California home). The excellent scenic design, by Michael McKeon, is beautifully lit by Curtis Mueller.

Out in their wilderness, they get a surprise visit from Jeannette’s Ohio cousin and her hidebound Midwestern husband. These newly reborn, ultra-devout Christians are still devastated over the senseless, violent death of their college-age daughter, their only child.

The four can’t help but compare heartaches. Bill (terrific Tom Stephenson) can’t abide Neil’s use of medical marijuana for pain management (“It’s illegal!”). Bill and Dinah are shocked when Neil reveals that he’s going to “check out” on his own terms and in his own time – and Jeannette plans to go with him.

Anger, havoc, resentment and recriminations ensue. Bill calls them “amoral.” Awful epithets are flung in both directions, followed by departures, separations and regrets. But at the end, tectonic shifts have occurred, and a few minds have, remarkably, changed.

This is a thrilling, if heartbreaking (and tear-jerking) journey. It’s impossible to imagine a better, stronger, more thoroughly committed and convincing cast. In this emotional peaks-and-valleys ride, there isn’t a single misstep. Every moment rings true (well, maybe Jeannette’s re-consideration is kind of abrupt).

Though the two-hour play could be shorter (there were at least three potential endings – including the close of the first act), the intrigue and intensity are sustained throughout, thanks to Yael-Cox’s taut direction and superlative ensemble.

These two disparate couples are smartly written and brilliantly inhabited. The philosophical deck is not stacked; each character makes a valid point at one time or another.

Jones is so realistic —   gentle but steely in his decline —   that he’s scary. Driscoll brings her usual no-nonsense honesty to this emotionally demanding role: her Jeannette is sharp and funny and falling apart. Carney’s shattering Dinah, forcing jollity to cover her anguish, buries her distress in denial and knitting. Stephenson’s insistent, quietly aggressive Bill (craftily, no villain here) escapes to his car, or his lawn mower.

Everyone is trying to cope. The range of responses to traumatic life events is impressive, in the writing and in the presentation. The play even offers a variety of ways that love and marriage may or may not survive the catastrophic onslaught and aftermath.

If you’re serious about theater, social issues and life choices, this is a production you absolutely must not miss.

The Intrepid Theatre Company production of “QUALITY OF LIFE” runs through August 2 at the Carlsbad Village Theatre, 2822 State St.

Performances are Thursday-Saturday at 8pm, Sunday at 2pm