‘THE SANTALAND DIARIES” at the OB Playhouse 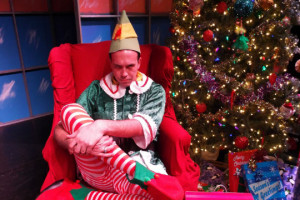 How about a holiday nosh of irony and crumpet… dripping with sarcasm?

Yes, that wily, smiley, acerbic Elf, Crumpet, is back – telling his tales of Christmas woe in “The Santaland Diaries,” the David Sedaris monologue that remains one of the most popular broadcasts ever aired and re-aired on NPR.

James P. Darvas is perfect in the green-velvet role. He can effect the same whiney quality as Sedaris and the ideal sardonic tone, as he takes on multiple voices and accents (his tough-talking New Yorkers and Jerseyites are sublime), and gives a different timbre to each of the Santas in Macy’s elaborate 8th floor fantasy of Christmas, Santaland.

Jerry Pilato directs, and the pacing is excellent. The set is effective, too (designed by Bill Connard and Pilato, who’s also billed as co-sound designer, with Connie Terwilliger), with its large, brightly decorated tree, capacious red Santa-seat, oversized presents (some of which cleverly double as cubes for Crumpet to sit on).

But, having listened to and watched this monologue many times, I do have a few gripes about this one.

Although Sedaris did not approve of the stage adaptation (by Joe Mantello), the quasi-autobiographical piece still has to retain his sensibility. He never dropped a ton of F-bombs. And he didn’t need to say, “Listen, you guys” to connect with his audience.

He’s well-known as an old-fashioned guy, a devotee of Billie Holiday, not Christina Aguilera (though Darvas does a cracking good exaggeration of her singing “Away in a Manger”). Oh, and if his sister, entertainer Amy Sedaris, knew enough sign language to teach him a seminal sentence (something off-the-wall about a tumor as big as an olive), the performer, like Sedaris, should learn the actual signs for conveying that.

Okay, now that I’ve gotten all that off my chest, I can say that I laughed a lot at Darvas’ delicious Crumpet – a  33 year-old, out-of-work actor whose fantasy is to be on “Days of Our Lives,” and instead he’s stuck with an ever-encroaching horde of vomiting kids, pushy parents and eccentric Santas for one ghastly and interminable holiday season. It’s a hilarious, bittersweet story and Darvas captures all the nasty and nice elements.

The show is an irresistible antidote to holiday treacle. If you savor snarky adult humor, you’ll lap it up.