“THE MUSIC MAN” at the Welk Resort Theatre 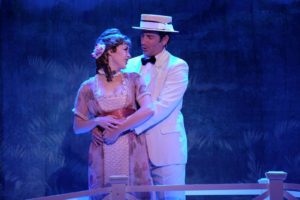 There are several essential ingredients for a successful production of “The Music Man”: powerful voices, strong dancers and rat-a-tat timing. Check, check and check. The Welk Resort Theatre has it all.

Director/choreographer Ray Limon moves the show along at a sprightly clip, with especially well-timed, well-articulated work on the delectable syncopated, moving-train opener, “Rock Island,” and the fast-paced snake-oil sales of “Trouble.”
David S. Humphrey, with his creamy baritone, makes for an attractive, seductive Harold Hill, the fast-talking flimflam man, a traveling salesman who goes around the country selling a bill of goods – in the form of a boys’ band. He always takes the money and runs.
But this time is different. When he lands in River City, Iowa, the savvy town librarian, Marian Paroo, isn’t buying. Yet, when Hill’s con transforms the whole town, and he even opens up Marion’s taciturn young brother, she softens and falls. And Hill, for the first time in his life, falls too.
The musical classic is awash in small-town, mid-century, Middle American nostalgia, complete with the requisite gossiping busybodies. And the oft-repeated “chip-on-the-shoulder stubbornness of Iowans.” The little burg needed some shaking up. And so did the reluctant lovers.
The newly married Charlene (Koepf) Wilkinson brings her gorgeous voice and pitch-perfect standoffishness to the role of Marion. The singing, dancing and acting are strong throughout, but there’s no chemistry between the town Bad Boy and the Mayor’s daughter, though they both dance terrifically.
Alex Allen is comical and agile as Marcellus, Hill’s former partner in crime, and Robin LaValley is amusing as the Mayor’s wife. The sound balance could be better. But the sets and costumes are just right.
It’s a shame that the Welk has decided to discontinue live music, but if ever a show called for a big, brassy orchestral sound, it’s this one, so the taped music is less offensive than usual.
Overall, it’s a delightful production of a show that, with its fun story and fabulous Meredith Willson score, never goes out of styl