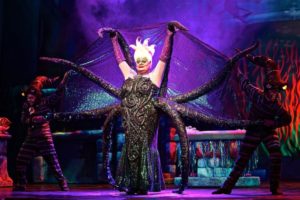 If you want to get analytical/philosophical about it, the Disneyfied Hans Christian Andersen fairy tale, “The Little Mermaid” (musicalized and happily-ever-aftered) is encouraging tolerance of others (“I can’t hate them,” the titular mermaid, Ariel, says of the humans she adores, “just because they’re different”).

On the other (darker) hand, you could say that the show is, if not advocating, at least condoning, inter-species coupling (which certainly comes with an ‘ick’ factor). But then, who’s philosophizing about a frothy-lite musical amusement aimed at the kiddies?
If you take a sweetness-and-light, all’s-well-that-ends-well, good-triumphs-over-evil approach (which is antithetical to the dark Andersen original), “The Little Mermaid” is just the tale of a girl who doesn’t fit in where she lives, and wishes she could be where she thinks she belongs: not “Under the Sea,” but in “The World Above,” with two legs and a Prince.

In order to make this happen, Ariel makes a deal with the devil; in this case, her nefarious aunt, the mega-tentacled octopus Ursula. Ariel agrees to sell her soul and give away her enchanting voice. And if, after three days, the Prince doesn’t kiss her, she vanishes, and her soul belongs to Ursula for eternity. When her father, King Triton, learns of this horrible deal, in order to get his daughter back, he, too, makes a deal with nasty Ursula, his sister: to cede all his power to her, which is what she’s always wanted.

Unlike every other Faustian bargain in literary history, all these deals wind up being reversed. Poof. Everybody’s happy, dreams are fulfilled, the girl marries the prince. Ah, the Wonderful World of Disney.

Okay, now that I’ve gotten all that off my chest, I can look at the Moonlight Stage production of the musical on its own terms.
It’s colorful, energetic, lively, and very well sung. The orchestra (14 instruments, under the baton of the skillful Elan McMahon, who makes them sound much grander) and the dancing (choreography by Karl Warden) are excellent.

The sets (rented from the Music Theatre of Wichita)seem a tad cheesy, being flat, two-dimensional and cartoony which, I suppose, is fitting, since the show  is based on a Disney animated movie (1989). But the lighting (Jean-Yves Tessier) brings them to bubbly life. The costumes (also rented from Wichita, although local Renetta Lloyd fashioned the outrageous, glittery-glam octopus getup) are wildly imaginative (those onstage kids as little turtles are soo cute).

Moonlight producing artistic director Steven Glaudini (who has a gift – and a ton of contacts – for snagging a raft of shows that nobody else has yet produced in San Diego), keeps the pace sprightly and the action bouncy. He’s created a strong production, even if the appeal is primarily for young girls. As he said in his opening night curtain speech, this is an excellent gateway/introduction to (musical) theater for kids.

But one thing I couldn’t fathom: why, oh why, do none of the mermaids (neither Ariel nor her six mer-sisters) have fish tails? They all seem to be able to walk and dance under water with ease. At least during the times when Ariel is sitting on a rock (in that iconic Copenhagen mermaid pose), she would certainly benefit from a painted or sculpted tail. Doesn’t seem that much to ask. Blame it on Wichita?

In spite of her garish, orange, Raggedy Ann wig (another borrowing from the film), power-voiced Chassey Bennett is thoroughly engaging as the wide-eyed, wishful Ariel. And David Burnham is equally adorable and vocally adept as her Prince, Eric. They really make a charming pair.

Though the sentiments sometimes lean toward the trite and gooey (book by Doug Wright), and you may drown in the interminable “fish-puns” (“angling for trouble,” “give her the hook, “look what the catfish dragged in,” etc.), if you want some actual intellectual stimulation, listen closely to the very clever lyrics of the late Howard Ashman (with additions, for the stage production, by Glenn Slater), set to Alan Menken’s catchy melodies (“Les Poissons,” anyone?).

The big show-stopper is “Under the Sea,” and you can’t beat the perfectly-synchronized tap-dancing seagulls in the decidedly goofy “Positoovity” (one of Slater’s creations, not Ashman’s).

Sappy? Sure. (Love conquers all, after all, on land and sea). But the kids in the audience — who were totally silent and rapt on opening night —  will, doubtless love it.