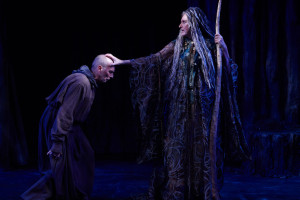 “The Illusion” is steeped in wizardry and awash in words.  In its play-within-a-play structure and its luxuriant language, it’s all about the magic of theater.

While he was working on his deep, dark, AIDS-era masterpiece, “Angels in America,” Tony Kushner diverted himself by adapting a 17th century French comedy, “L’Illusion Comique.” It’s a humorous, sumptuous feast, in which there may not be a direct translation of even one of Pierre Corneille’s original words. But c’est la vie…

With his exuberant lexicon and amorous orchestrations of verbiage, Kushner has brought his linguistic alchemy to the story of a bull-headed, hard-hearted father who banished his son years ago, and is literally dying to find out what happened to the sprout, so he can, at long last, designate him heir.

In a subterranean cave, he seeks out a world-weary sorcerer, who conjures scenes from the young man’s life, where he makes his way as an impoverished orphan. The focus of these scenarios is the many faces of love – eternal, parental, unrequited, denied and refused.

The phantasms at North Coast Repertory Theatre, while delightfully designed, enacted, lit and costumed, pale before the luxuriance of the language. Where else will you hear invectives like “presumptuous humuncula” or “fountain of dreadful metaphors?”

The butt of those effusive expletives is flamboyantly portrayed by Andrew Ableson, part of the masterful ensemble amassed by skillful director David Ellenstein.

The accomplished and welcome Kandis Chappell, in a role most often played by a man, is a commanding presence as the dread-locked sorcerer, and John Greenleaf is excellent as her sometimes-mute Amanuensis.  Michael Polak, who also served as fight director, is superb as the swaggering, womanizing son, Calisto, and John Herzog is his hidebound father. All under ever-changing names, Calisto’s two paramours are the splendid Christina Flynn and lovely Sharon Rietkerk. Paul Turbiak is another of his ostentatious rivals.

There’s much fun to be had in this lavish love letter to actors and their craft.  And there are more than a few things to ponder: the artifice and enchantment of theater, for example. The mutability and fragility of life. And the inevitable evanescence of both.