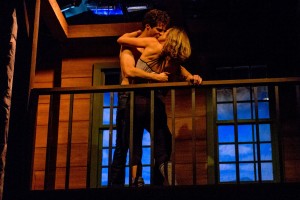 Two authors meet-cute at a writer’s retreat in a secluded cabin. A Michigan blizzard conveniently guarantees that no one else will arrive.

He’s a 20-something, aggressive and seductive. She’s a decade older, dubious and wary. He’s a sleazy blogging phenom, whose exploits have led to a wildly successful, salacious book and movie deal. She’s still smarting from the marketing misstep that caused her dazzling first novel to tank.

But before you can say Joyce Carol Oates, the title delivers on its promise – though fortunately, not in plain sight.

“Sex with Strangers” is about a lot more than its name suggests. The 2011 comedy by Laura Eason, who’s a writer/producer on “House of Cards,” is certainly about the vagaries of the literary life. Moving on from failure – or success. Tangible vs. e-books. Ambition and ideals vs. compromise. But maybe most of all, it’s about identity – real and online, public and private.

Ethan has read Olivia’s book. He thinks it’s brilliant, and that in itself is an aphrodisiac. Olivia is extremely protective of her second novel, and won’t show it to anyone. But he wants to publish it electronically, to promote his blog and secure literary significance for both of them.

It looks like things are about to go seriously south. But what you expect doesn’t happen. And some of what does is unexpected.

This unpredictability keeps the play interesting. And the San Diego Rep production keeps us keenly engaged.

Director Delicia Turner Sonnenberg brings her prodigious wit, sensitivity and deep sense of character to the piece, which is enhanced by her dynamic cast, both doing their very best work.

Connor Sullivan, too often cast as the clueless nice-guy, has become the consummate ripped, macho, misogynistic Bad Boy, insufferable but irresistible. Lisel Gorell-Getz is smart and sassy but also vulnerable, wounded, self-protective … and ambitious. These are deliciously rich, detailed portrayals.

Brian Redfern’s set is a wonder, moving from cozy cabin to book-lover’s refuge. The lighting and sound provide excellent ambiance. There’s snow outside the window. But the heat inside is palpable. And the ambiguous ending leaves us, too, just a little bit breathless.