“THE HUNCHBACK OF NOTRE DAME” at Moonlight Stage Productions 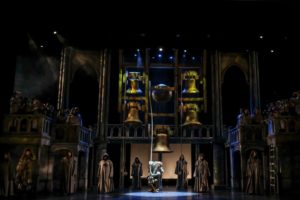 Not every musical can create a good story. And not every good story makes a good musical.

Case in point: “The Hunchback of Notre Dame,” Victor Hugo’s 1831 romantic/Gothic novel about faith and love, outsiders and acceptance. Noble themes all, especially at this moment in our own history.

But when Disney gets into the act, the depth and darkness are typically sheared off. The 1996 animated film, with its silly gargoyle statues, featured music by Alan Menken and lyrics by Stephen Schwartz, the sole collaboration of these two multi-award-winners. Both musical theater superstars have done better work elsewhere (“Little Shop of Horrors” and “Wicked,” for example).

But, with additions, their creations were transferred to a stage musical, which premiered in Berlin in 1999 and ran for three years. The revised North American premiere took place at the La Jolla Playhouse in 2014, in a co-production with the Paper Mill Playhouse in New Jersey. At that time, the decision was made not to take the show to Broadway.

Set in Paris in 1482, the story centers on the evolution of the sadly misshapen bell-ringer, Quasimodo (marvelous David Burnham), who is also supposed to be partly blind and deaf, with impaired speech – though none of that is in evidence here.

Since shortly after his birth, the young man has been virtually enslaved in the bell-tower of Notre Dame by the scheming and self-righteous Archdeacon Claude Frollo (Lance Arthur Smith). The baby was forced on Frollo by his profligate brother, who fathered the child with a gypsy woman.

Frollo calls the malformed child a “monster,” names him Quasimodo (a cruel moniker that means ‘half-formed’) and locks him away, never to leave the tower or be seen in public.

Sad and lonely, with only the stone saints and gargoyles for friends (nicely conveyed at Moonlight Stage Productions),  Quasimodo looks down on life below and aches to join the populace, particularly on this day of the “Feast of Fools,” when the outcast gypsies (whom Frollo reviles) are allowed to roam free.

In the square, a tangled love quadrangle forms: Quasimodo, Phoebus, the puffed-up Captain of the Guards (Patrick Cummings) and Frollo are all simultaneously smitten by the free-spirited gypsy dancer, Esmeralda (Janaya Mahealani Jones).

This entanglement will lead to fire, destruction and multiple deaths. The story is dark, but there’s an incongruous lightness to this musical.

The songs do not feel organic to the text (book by Peter Parnell); it’s blatantly obvious whenever a musical number is called for, and many of the power ballads seem like act-enders. Menken’s music has some heft, though it isn’t as melodically memorable as his other work; Schwartz’s lyrics are surprisingly banal and predictable.

The best part of the musical is the sublime Latinate choral creations, at Moonlight, performed by an outstanding 22-voice choir, joined by 15 Congregants, who alternate with Clopin, the King of the Gypsies (Richard Bermudez), in narrating the story.

While the vocal work is superb throughout (thanks to the masterful musical direction of unfailingly excellent conductor Elan McMahan, and her robust 15-piece orchestra), the characters are less nuanced.

Burnham creates the most compelling, multi-dimensional character. Except for one split-second disappearance, there’s not much magic in the canny chameleon, Clopin. There’s insufficient evil and torment in Frollo as his extreme moral fervor butts up against his uncontrollable lust. There’s a lack of pompous bravado in Phoebus, and little dancing from the ostensibly irresistible and seductive Esmeralda. All sing very well; that seems to be the area of greatest focus by director Steven Glaudini.

Though both a choreographer and assistant choreographer are listed in the program, there’s a negligible amount of dancing and the staging overall is static; the cast often just stands, facing the audience, and sings.

The scenery (rented from the Actors Theatre Series) is aptly majestic and monumental. The projections (from Musical Theatre Wichita) are sometimes thrilling, sometimes extraneous or too on-the-nose. The lighting (Jean-Yves Tessier) effectively emphasizes the shadows, but the sound (Jim Zadai) was problematic on opening night, with mics going in and out. The costumes (coordinated and executed by Carlotta Malone, Roslyn Lehman and Renetta Lloyd) range from drab (the Congregation) to colorful (the Gypsies).

This massive, ambitious production contains a lot of people (nearly 60 in total) and a lot of moving parts, but it underscores the weaknesses of the musical. Despite the show’s melodramatic leanings, we’re left with the lyric, “What makes a monster and what makes a man?” Unsightly but open-hearted Quasimodo never fails to break our hearts.