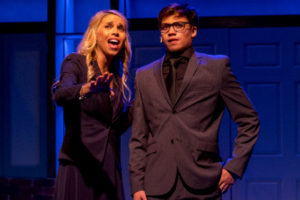 For Elle Woods, pink is the new black. Wait – scratch that. She can’t imagine why anyone would wear black “when nobody’s dead.” Clearly, she’s not from New York. Nope, she’s a Valley Girl through and through, a born-to-shop native of Malibu, blonde hair, sorority sisters and all.

As she graduates from UCLA with a 4.0 (“in Fashion Merchandizing,” we’re repeatedly reminded), all she really wants is a big, fat engagement ring from Warner Huntington III, her condescending, narcissistic boyfriend (played by Cody Ingram, who could be preppier, snootier and snarkier).

But Warner has other plans; he’s off to Harvard Law School, and Elle is… well, just not “Serious” enough. Just when she was expecting a proposal, he breaks up with her instead.

So what’s a brokenhearted blonde bimbette to do? Why, pull up her big-girl (probably pink) panties, take the L-SATs, and (Literally) dance her way into Harvard Law herself. She does it “for love,” but she winds up finding her strength, smarts and her own best self. And –Bonus! — along the way, she finds a down-to-earth Nice Guy law clerk who adores her – for her brains!

That would be Emmett Forrest (Sittichai Chaiyahat, a wonderfully natural and convincing actor, still a student at Mira Costa College – and a real find!), who sees beyond Elle’s outer (pink) trappings, trusts and believes in her, helps her succeed at Harvard (coaching her to get “A Chip on Your Shoulder” like him, a guy from a lousy neighborhood who wasn’t handed anything, but worked his way up), and watches with pride, and no Warner-like competitive envy, as she soars.

It’s a lesson about not judging books by their covers, about smashing glass ceilings and stereotypes, about discovering who you really are, and about self-empowerment.

But all that makes the show sound much deeper and heavier than it is. Those messages are tucked into a big, frothy, fun-filled musical with enormous energy and heart. And dogs! (two of them, incredibly well behaved).

“Legally Blonde’s” book was written by Heather Hatch, based on the novel by Amanda Brown and the 2001 film of the same name, with music and lyrics by Laurence O’Keefe and Nell Benjamin.

The three musical creators were nominated for Tony Awards, and the show won an Olivier Award (England’s Tony) for Best New Musical. You may not walk out humming the melodies or singing the songs (except maybe the totally-fer shure high-spirited opening number, “Omigod You Guys”), but you’ll certainly get a kick out of some of the clever lyrics, which are mostly quite intelligible in the New Village Arts production (despite a few staticky miking problems at the performance I attended).

This is a big musical for a small theater, and NVA artistic director Kristianne Kurner and her creative team have done everything possible to make the show work in this space – with double-casting and simple, fold-out sets (Christopher Scott Murillo). The often-imaginative choreography (by Kyle Hawk, a seasoned dancer making his choreographic debut) exceeds the skill-set of some of the players (there are only a couple of real dancers in the mix), so some of the moves feel clunky. But the jumprope-workout number “Whipped into Shape,” led by peppy Catie Marron, is a hoot.

The primary performances are solid, starting with pretty-in-pink  Danielle Levas as Elle. She may not look precisely like a college student, but she has the blondeness, the chops and the dance skills to pull off the role with aplomb. Marlene Montes is a delight as the hopeful and helpful Irish-loving hairdresser, Paulette; Claire Bleher is impeccable as sassy, snotty and snobby Vivienne, Warner’s new girlfriend, who’s cruel to Ellle —  until she realizes where her true loyalties belong. Gina Maria Cioffi is lively and feisty as a member of Elle’s Greek Chorus and a devoted Delta Nu sorority sister. Steven Freitas has just the right nasty superciliousness as the predatory Professor Callahan; and ace dancer Trevor Rex shines in several roles, particularly the spiteful ex and the pouty pool-boy.

Music director Tony Houck makes a fun cameo appearance – emerging from backstage, where he’s leading the fine 4-piece band (he’s on keyboards… and may be responsible for those charming, surprising violin and harpsichord moments).

Not everyone in the 17-member cast has the same level of expertise, but the energy is aptly effervescent and the singing is strong.